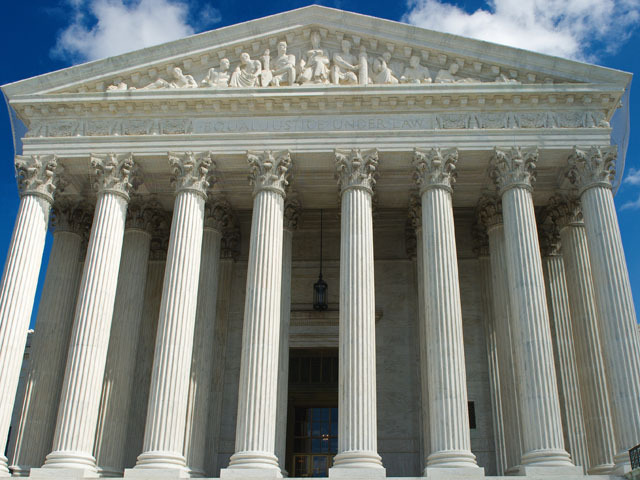 "What is the question that I think people are driving at, at least as I understand it and certainly share the concern, is that if you win this case, then there is nothing to prevent the police or the government from monitoring 24 hours a day the public movement of every citizen of the United States," Justice Stephen Breyer told a Justice Department attorney. "So if you win, you suddenly produce what sounds like '1984' from their (opposing counsel) brief. I understand they have an interest in perhaps dramatizing that, but--but maybe overly. But it still sounds like it."

"And so what protection is there, if any, once we accept your view of the case, from this slight futuristic scenario that's just been painted, and is done more so in their briefs?" Breyer asked.

The high court heard arguments in a case in which District of Columbia police surreptitiously installed a GPS (Global Positioning System) tracking device on the car of Antoine Jones, a suspected cocaine dealer. At the time, police did not have a valid search warrant. The Justice Department appealed a lower court ruling that threw out the conviction.

A ruling will establish whether a warrant signed by a judge is required before law enforcement can track a driver's every move on the roads. The that no warrant is needed.

Deputy Solicitor General Michael Dreeben told the court that cars traveling on public roadways do not have the same Fourth Amendment privacy protections afforded citizens in their homes. In addition, GPS devices on cars are akin to beeper surveillance used to track suspects in their vehicles along with visual monitoring.

However, Chief Justice John Roberts and other justices pointed out that GPS devices make it easy to collect much more information about people than could previously be done, rendering moot the legal notion of a "trespass," which happens when a device is installed on a person's property.

"Essentially, I think you answered the question that the government's position would mean that any of us could be monitored whenever we leave our--our homes, so the only thing secure is the home." --Supreme Court Justice Ruth Bader Ginsburg

"Essentially, I think you answered the question that the government's position would mean that any of us could be monitored whenever we leave our--our homes, so the only thing secure is the home," Justice Ruth Bader Ginsburg said.

Asked how many GPS devices are used by federal and state agencies, Dreeben said "in the low thousands annually."

Ginsburg asked defense attorney Stephen Leckar how GPS is different from video cameras, which are trained on streets and public spaces and recording peoples' movements constantly. "GPS is like a million cameras," said Leckar.

Justices touched on whether there had been a search or a seizure and whether it was unreasonable or not. "The unreasonableness requirement or prohibition does not take effect unless there has been a search," said Justice Antonin Scalia. But there is no search "when you are in public and where everything you do is open to the view of people," he added. "Why is this an invasion of privacy?"

"Because it's a complete robotic substitute" for human-based surveillance, Leckar said.

In his rebuttal, Dreeben said "Today perhaps GPS can be portrayed as a '1984'-type invasion, but as people use GPS in their lives and for other purposes, our expectations of privacy surrounding our location may also change."

"That seems too much to me," Justice Elena Kagan said. "I mean, if you think about this, and you think about a little robotic device following you around 24 hours a day anyplace you go that's not your home, reporting in all your movements to the police, to investigative authorities. The notion that we don't have an expectation of privacy in that, the notion that we don't think that our privacy interests would be violated by this robotic device, I'm--I'm not sure how one can say that."

The court did not indicate how it would decide the case or when.