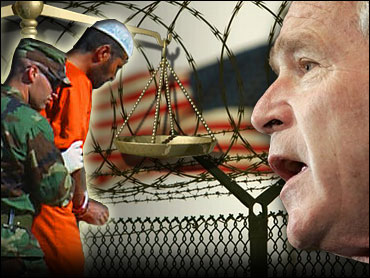 The ruling, a rebuke to the administration and its aggressive anti-terror policies, was written by Justice John Paul Stevens, who said the proposed trials were illegal under U.S. law and international Geneva conventions.

The case focused on Salim Ahmed Hamdan, a Yemeni who worked as a bodyguard and driver for Osama bin Laden. Hamdan, 36, has spent four years in the U.S. prison in Cuba. He faces a single count of conspiring against U.S. citizens from 1996 to November 2001.

Two years ago, the court rejected Mr. Bush's claim to have the authority to seize and detain terrorism suspects and indefinitely deny them access to courts or lawyers. In this follow-up case, the justices focused solely on the issue of trials for some of the men.

That decision rejects the Bush administration's claims that al Qaeda prisoners aren't protected under the Geneva accords, reports CBS News correspondent Wyatt Andrews. But the ruling gives Mr. Bush a way out, suggesting he use the court martial system or go back to Congress.

The vote was split 5-3, with moderate Justice Anthony M. Kennedy joining the court's liberal members in ruling against the Bush administration. Chief Justice John Roberts, named to lead the court last September by Mr. Bush, recused himself in the case because as an appeals court judge he had backed the government over Hamdan.

"Any way you slice it, this is a defeat for the Bush Administration, which wanted the go-ahead from the Court to begin prosecuting these detainees under military procedures that government lawyers had come up with," CBS News legal analyst Andrew Cohen says. "Now the White House has to go to Plan B, but I'm not sure the folks there know what that even looks like."


CBS News White House correspondent Peter Maer reports the White House was stunned by the ruling. Speaking after a meeting with Japan's visiting prime minister Thursday, President Bush said he will work with Congress to get approval to try terrorism suspects before military tribunals.

Today's ruling "won't cause killers to be put out on the street," Mr. Bush said, and that he "will not jeopardize the safety of the American people."

The president also noted that since the ruling came in during that meeting, he hadn't had a chance to fully review it.

Following the decision, Senate Majority Leader Bill Frist released a statement saying that after the July 4th recess, he would introduce legislation that authorizes military commissions for accused terrorists.

"To keep America safe in the War on Terror, I believe we should try terrorists only before military commissions, not in our civilian courts," Frist said.

The administration had hinted in recent weeks that it was prepared for the court to set back its plans for trying Guantanamo detainees.

The president also previously told reporters, "I'd like to close Guantanamo." But he added, "I also recognize that we're holding some people that are darn dangerous."

"The Supreme Court decision on Guantanamo is the most significant challenge to date of the administration's war on terror," said CBS News foreign affairs analyst Pamela Falk, a law professor who has been to the Base, "because the rebuke was on international law and U.S. law grounds and gives support to the Geneva Conventions in U.S. courts."

The court's ruling says nothing about whether the prison should be shut down, dealing only with plans to put detainees on trial.

"Trial by military commission raises separation-of-powers concerns of the highest order," Kennedy wrote in his opinion.

Cohen notes that the detainees are "neither going to go free or get tried, at least in the short term." He suspects, however, that there will be an increase in political and legal pressure to change their status or at least get them out of Guantanamo Bay.

The prison at Guantanamo Bay, erected in the months after the Sept. 11, 2001, terror attacks on the United States, has been a flash point for international criticism. Hundreds of people suspected of ties to al Qaeda and the Taliban, including some teenagers, have been swept up by the U.S. military and secretly shipped there since 2002.

Three detainees committed suicide there this month, using sheets and clothing to hang themselves. The deaths brought new scrutiny and criticism of the prison, along with fresh calls for its closing.

CBS News correspondent David Martin reports the decision directly affects 14 prisoners. Proceedings had begun in 10 of those cases but were suspend last month after the three suicides. All of these prisoners can be described as al Qaeda foot soldiers.

The court's willingness, Thomas said, "to second-guess the determination of the political branches that these conspirators must be brought to justice is both unprecedented and dangerous."

In his own opinion, Justice Stephen Breyer said, "Congress has not issued the executive a 'blank check.'"

"Indeed, Congress has denied the president the legislative authority to create military commissions of the kind at issue here. Nothing prevents the president from returning to Congress to seek the authority he believes necessary," Breyer wrote. 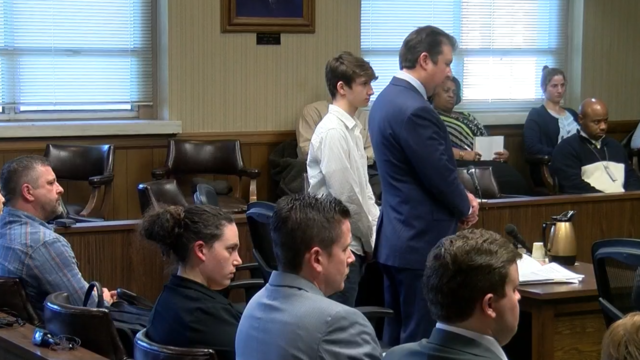 Hayden Long's mother says he agreed to plead guilty to assault and underage drinking charges to avoid being tried as an adult for felony assault.