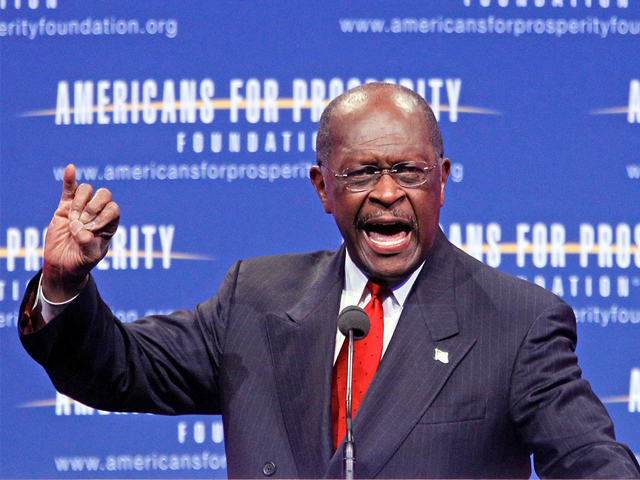 Herman Cain's poll numbers dropped for the first time since revelations last week that he was accused of sexual harassment more than a decade ago, a poll released Sunday showed.

Cain's favorability among all registered voters fell to 32 percent from 37 percent. The poll is the first national poll to show the scandal taking its toll on the candidate's ratings, though it should be noted that the poll was conducted online. Online polls are typically much less reliable than traditional telephone polls.

A Washington Post telephone poll conducted in the first four days after the revelations were made public Oct. 30 showed that Cain's support was still holding strong and had him virtually tied with former Massachusetts Gov. Mitt Romney.

Exhaustive media coverage of the charges of sexual harassment during Cain's tenure as head of the National Restaurant Association in the 1990s has boosted Cain's name recognition and helped him raise campaign cash from small donors.

His campaign said he raised $1.6 million in the first five days after the scandal broke.

And Cain says the ordeal has been harder on his wife than on himself, and he's still "in it to win it."

Roughly 40 percent of all poll respondents said the revelations had made them less likely to see Cain in a favorable light, while about 35 percent of Republicans said so.

There were about 1,007 participants in the online poll conducted on Friday and Saturday.

"Since it was an online poll, typical margins of error do not apply. Despite that, various recognized methods were used to select as representative a sample as possible and weigh the results," the Reuters news agency, which commissioned the poll from Ipsos, wrote.