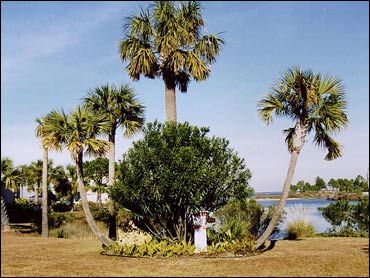 More than two decades after Ronald Reagan was widely derided for claiming trees cause more pollution than cars, scientists are continuing to assess the role forests play in creating smog.

New research suggests trees play a more complicated role in air pollution than previously thought, with some species shown to worsen smoggy conditions that pose a health risk to humans.

Choosing one tree species over another to green up a neighborhood can affect air quality, just as does the type of vehicle one opts to drive, scientists said.

Here in the smog capital of the nation, for instance, large numbers of sweet gum trees can make a bad situation worse, since they are prodigious emitters of the types of gases that react with tailpipe pollution to form ozone. Avocados are far better.

Oaks have been fingered in places like Atlanta and St. Louis, where they are partly to blame for air pollution there.

And in the Columbia River Valley of Oregon, vast plantations of poplars, grown in tight rows just like any other crop, have a significant effect on atmospheric chemistry in the region, although it's not clear if the effects are necessarily negative.

Before anyone advocates chopping down trees to clean up the air - forgetting, for one, that they give us the oxygen we breathe - scientists caution that whatever forests pump into the air is natural. They also provide shade and scrub many pollutants from the air.

Reagan was lampooned by Democrats in 1980 for having claimed that 80 percent of air pollution was caused by plants and trees. Reagan aides later said the then-presidential candidate had been misquoted and was referring only to certain types of pollutants, not to all air pollution.

The world's trees, shrubs and other plants do produce massive amounts of hydrocarbons - nine times as much as do automobiles, by some counts.

Those gases, most notably isoprene, are major ingredients of ozone, a lung irritant linked to asthma and other serious respiratory ailments.

Ozone formation also requires a second ingredient: nitrogen oxides, a byproduct of the combustion of fossil fuels. A major source of those gases is the tailpipe of just about every car, truck and bus on the planet.

Waft nitrogen oxides - NOx for short - over a forest of isoprene-emitting oaks in, say, the suburbs of Atlanta, throw in a little sunshine and ozone levels will spike.

"It's not the trees' fault we're throwing NOx at them," said Jose Martinez, an atmospheric chemist with the Georgia Department of Natural Resources.

Still, significant numbers of trees of the wrong type, much like a traffic jam of SUVs, can exacerbate a bad ozone situation.

Across the Southeast, among the leafiest regions of the country, ozone pollution is worse than it would be were it not so heavily forested with high isoprene-emitting tree species, scientists said. Even the kudzu that has overrun the region contributes a fair share of isoprene.

"There is no question they are contributing to ozone levels in those areas," said Hal Westberg, an atmospheric chemist at Washington State University, of the abundant vegetation.

In places like St. Louis, ozone levels are boosted by isoprene traceable to the dense forests of oaks in the Ozarks.

It's not necessarily true in Houston, however. Scientists had believed trees were implicated in the ozone pollution that, at times, eclipses even that of Los Angeles.

A 2000 study revealed that emissions from the numerous petrochemical plants in the area swamped any natural sources of the gases, said Mark Estes, an atmospheric scientist with the Texas Commission on Environmental Quality in Austin.

"Trees are kind of off the hook in Houston," Estes said.

It's not clear why plants emit isoprenes and other gases, but some speculate that it protects photosynthesizing leaves from heat stress.

The effect on a hot, sunny day is often striking: Scientists believe the Smoky Mountains and Blue Ridge Mountains were named because of the haze of isoprene that cloaks their slopes.

In 2001, the California Air Resources Board went so far as to assess more than 1,400 tree species and how much hydrocarbons they emit, as well as pollen production.

A Web site operated by California Polytechnic State University at San Luis Obispo allows users to pick among tree species common to California according to a variety of attributes, including for more than 200, their gas emissions.

Sweet gums for instance rank high, according to the SelecTree site.

A forest of 10,000 of the trees emits perhaps 22 pounds of hydrocarbons an hour - the equivalent of spilling a dozen gallons of gasoline and allowing it to evaporate, according to an estimate by the University of California Cooperative Extension.

Those emissions can contribute to ozone formation wherever there is enough sunlight and a ready source of nitrogen oxides.

A recent study conducted by scientists at the University of California, Berkeley found that winds carry nitrogen oxides and other emissions from Sacramento over the oak-studded foothills of the Sierra Nevada.

That urban pollution, coupled with the natural isoprene emitted by the oak forests, was on average the source of 40 percent of the ozone produced on the mountain range's western slopes, according to the October 2002 study in the Journal of Geophysical Research.

Westberg and a colleague, Brian Lamb, are studying massive poplar plantations along the Columbia river in Oregon, where the fast-growing trees are raised for pulp. The trees pump hydrocarbons into the atmosphere, although it's not clear if that contributes to significant ozone production.

"There's absolutely no question this monoculture growing of poplar trees emits a lot of hydrocarbons in a small area," Westberg said. "The question is, is there enough NOx around? We don't have the answer to that yet."

Even when certain trees are singled out, scientists stress they shouldn't be mistaken for the larger forest of air pollution, which includes significant amount of manmade emissions.

As Alex Guenther, a scientist with the National Center for Atmospheric Research, put it, "The work we do is not intended to say we need to get rid of the trees."