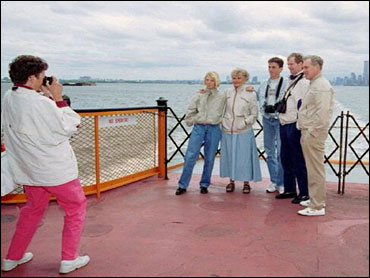 
I've attended most of the 16 annual Demo technology conferences and, each year, start-up companies parade new products hoping to catch the attention of the venture capitalists, industry-insiders and the press. One year the hit of the show was a small company called Palm. Another year it was TiVo. This year the most impressive product, as far as I'm concerned, was from Riya, a Redwood City, Calif., company that has created a new type of photo search engine that uses both face recognition and text recognition.

If successful, it could revolutionize the way people keep track of their photo collections because it could actually tell you who is in each picture. You could, say, have the software automatically find all pictures of Sally. Or maybe just those pictures with both Sally and Harry.

CEO and co-founder Munjal Shah says he started the company because he was frustrated by his inability to organize the 37,000 photos on his PC. Yes, he's a new father.

The service looks inside your photos to determine who is in there. It's not totally automatic and Shah admits that it's not perfect. You train it by selecting a sample of photos and typing in the name of the person. The service analyzes the facial characteristics and other attributes of the picture and learns to associate the person or people in the photo with the names you enter. It also reads text that is in your photos.

CBSNews.com Technology Consultant Larry Magid talks with Munjal Shah, CEO of Riya — a company that plans to offer a revolutionary face recognition system to help people search through their photos.
Shah says that it takes the software about 10 seconds to recognize each photo. Some of the data is uploaded to Riya's servers which analyze the data and attempt to link the photos with the people in them. Don't expect it to recognize your 15-year-old based on photos from when she was a baby. Shah recommends that you get samples of people at least once a year — especially kids — as they grow older.

Shah explained that the software acts very much like a person in recognizing people in photos. Let's say you see someone at a party who is wearing a green shirt. Later you see that same person across the room. You might not be able to make out his facial characteristics but you see the shirt and make a pretty good guess that it's the same person. Riya also makes guesses and Shah says that it doesn't always guess right. Still, even if it's only accurate 70 percent of the time, it's going to be faster than having to look at each picture yourself and manually tag them with information as to who is in them.

In addition to recognizing people, the software can also recognize text in a photo. If someone in a picture is standing in front of a sign that says "Yosemite," it might guess that it was taken at Yosemite National Park. Shah says that it can even read the name badges on people whose pictures are taken at trade shows or conventions.

The service will be free and supported by advertising. If you choose to make some of your photos public (which is optional) the service might put up ads around your photo. Shah gives an example of a user publishing pictures from a hotel in Hawaii to show others what it actually looks like. Riya will recognize that the picture was taken in Hawaii and might put up ads about Hawaiian vacations.

As of this writing, the service is not yet available for public trial. When you go to the Web site (www.riya.com) to sign up for the service, you're told that the "beta will start in a few weeks" and you're given an email address (beta@riya.com) where you can request to be notified when you can start using it.

Riya's onstage demonstration of its product at the Demo show was indeed impressive but please don't consider this a review. I haven't had a chance to test the service with my own photo collection and will reserve judgment until I do so.

Still, if it performs as advertised, this could be one of the breakthrough products of 2006. It will certainly be welcome at my house.