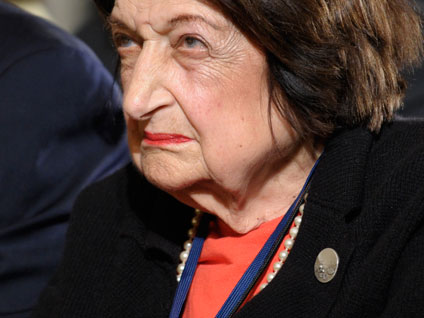 "I deeply regret my comments I made last week regarding the Israelis and the Palestinians. They do not reflect my heart-felt belief that peace will come to the Middle East only when all parties recognize the need for mutual respect and tolerance. May that day come soon." -- Helen Thomas

Poor Helen. She was my colleague for 11 years when both of us worked at United Press International - and she was one of the best reporters at the wire service or anywhere else, and one of the kindest people I knew back when we were scribes.

She was a very big name for UPI back then in the 1970s. When I was an editor in Washington, I recall late night, distinctly boozy, phone calls from Martha Mitchell. "Where's Helen?" Mrs. Mitchell would yell into the telephone. Minutes later, I would locate Helen, put her together with Martha, and the world would get a huge scoop on Watergate the next day.

But Helen had - and has -- a blind spot. It was no secret at UPI, but I do not remember that it ever seeped into her stories. And I used to edit a lot of them.

White House press secretaries going back 60 years have had to field her tough and often very useful questions on U.S. Middle East policy. Time after time she would ask about what she and, frankly others, perceived to be a special and unfair relationship between Israel and the United States. Year after year, she would take press secretaries and even presidents to task for what she saw as a double standard that involved turning a blind eye toward controversial Israeli actions or policies.

Helen thought the White House press corps was supine when it came to asking tough and potentially embarrassing questions about Israel. But her point was Israel, not Jews. Through the years, I never heard her speak in an anti-Semitic vein.

Indeed we all worked together at UPI -- Jews, Christians, atheists, whatever without regard for our religions. At a wire service you never had time to air religious differences. Every second was devoted to writing the next lead. And the next lead after that.

Helen will be 90 this summer and apparently age has taken its toll. She said some awful things about how Jews should "get the hell out of Palestine" and go home to Europe. I believe her when she says now that she deeply regrets that statement.

She has filed thousands upon thousands of stories over the years and at least when I was with her, she always took time to measure the words she used. I wish she had done so this time too. Better yet, I wish she had taken the time and made the effort to overcome the prejudice that has now drawn a great career to a sad conclusion.

Dean Reynolds is a CBS News correspondent based in Chicago. He previously spent nine years living in and reporting from Israel.
View CBS News In