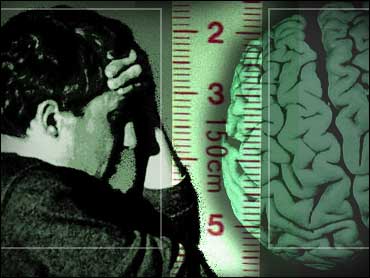 Swedish researchers say short men may have a higher risk of suicide.

"We found a twofold higher risk of suicide in short men than tall men," they write in the American Journal of Psychiatry.

Of course, short men can live healthy, rewarding lives with no suicidal designs. Tall men and those of average height can also commit suicide.

Rasmussen's study included nearly 1.3 million Swedish men born from 1950 to 1981. Their height at age 18-19 was noted. That data came from Sweden's military records. Their average height back then was about 5 feet 9 inches, write the researchers.

The men were followed for an average of 15 years. During that time, they had 3,075 suicides.

"Taller men had a much lower risk of suicide than shorter men," write the researchers.

They only focused on suicide risk among men aged 18-49. The results can't be applied to older men or to women, write the researchers.

The pattern didn't seem to stem from socioeconomic or prenatal influences, the researchers write.

The results also didn't change much when the researchers excluded men with psychiatric diagnoses at the time of military conscription.

Low weight gain in infancy might be a risk factor for adult suicide in adult life, write the researchers. So could impaired childhood growth due to psychological stress and disrupted family life, they report.

Short children may suffer stigmatization and discrimination, write the researchers.

But they didn't have information on childhood intelligence or whether the men were teased or traumatized as children because of their height.

But they did check alcohol-related deaths and deaths of undetermined cause.

Stronger ties were seen with alcohol-related deaths. That "suggest[s] that substance misuse may contribute to the observed patterns," write the researchers.

Suicide in the U.S.

Suicide was America's No. 11 cause of death in 2000, outnumbering homicides by five to one. That's according to the web site of the National Institute of Mental Health (NIMH).

If Someone Is Suicidal

"If someone is suicidal, he or she must not be left alone," says the NIMH.

"Try to get the person to seek help immediately from his or her doctor or the nearest hospital emergency room, or call 911. It is also important to limit the person's access to firearms, medications, or other lethal methods for suicide."

Shortness is not on the NIMH's list of suicide risk factors.

"Research has shown that more than 90% of people who kill themselves have depression or another diagnosable mental or substance disorder, often in combination with other mental disorders."

Other risk factors listed by the NIMH include: