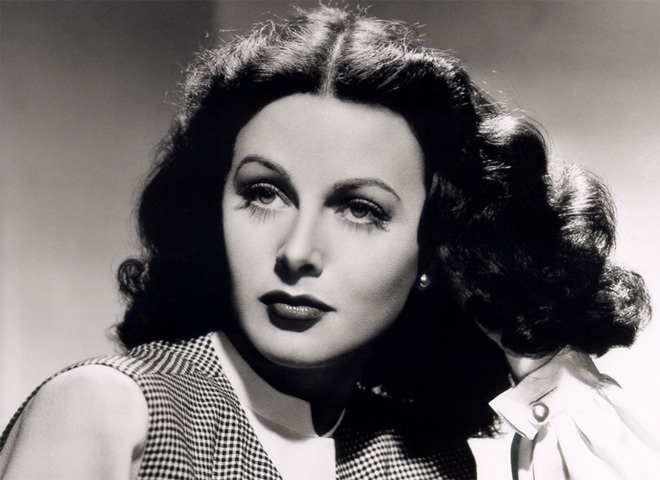 Hollywood is a place where folks are often recognized more for their looks than their talent - and actress Hedy Lamarr was no exception. But it's what she invented in her spare time - to help end that war - that has history turning a kinder eye, linking her to a bombshell of a whole different sort. Lee Cowan reports:

She possessed the kind of beauty that was haunting - an almost smoldering sensuality, with an exotic accent to match. She was once dubbed "the most beautiful woman in the world."

Even her name - Hedy Lamarr - sounded dark and mysterious. But although she shared the screen with Hollywood legends like Clark Gable, Spencer Tracy and Jimmy Stewart, people rarely remember Hedy's talent.

Most remember only her face - a regret she carried with her to her grave.

"The boys abroad, during the Second World War, voted her the most desirable, beautiful actress or pinup that they could possibly see," said writer Richard Rhodes. "So she had a great deal of fame and fortune, but not that inner satisfaction that she wanted in life."

Rhodes is an author best known for his Pulitzer Prize-winning work on the making of the atomic bomb - but his most recent book about Hedy Lamarr is just as explosive.

So what got a science writer interested in a half-forgotten celebrity? Quite simply, Hedy's other side - the intellectual side - and had it turned out, it might have been the blueprint for success far beyond Hollywood.

To the untrained eye the drawing is just a maze of wires and switches. But to Richard Rhodes, it was genius. What surprised him most, he told Cowan, was "the sheer inventiveness of the invention."

It was Hedy's idea for a secret communications system - specifically one that could guide a torpedo using a technology called "frequency hopping" - so that signal couldn't be intercepted.

"The first question always is, "What? A Hollywood star? What was she doing inventing some piece of electrical engineering?" said Rhodes.

Her life reads like a Hollywood script: The glamorous movie star by day was, by night, the lonely immigrant channeling an inner Thomas Edison.

"She set aside one room in her home, had a drafting table installed with the proper lighting, and the proper tools - had a whole wall in the room of engineering reference books." That, Rhodes said, was where she "invented."

It was a hobby that remained obscured in the shadow of her celebrity - one she rarely revealed, even to her own son, Anthony Loder: "She was such a creative person, I mean, nonstop solution-finding. If you talked about a problem, she had a solution."

Looking back, Loder - the product of the third of Hedy's six marriages - says his mother's tinkering may have been an escape.

"She wanted to stop all the Hollywood stuff which she didn't really enjoy," he said.

Most of Hedy's inventions - including a better Kleenex box and a new traffic signal - never really went anywhere. But her idea for that radio-controlled torpedo got a patent.

It was 1940, and German U-boats were wreaking havoc in the Atlantic torpedoing ships, very often with women and children aboard trying to flee the Nazis - something Hedy knew a little about.

She spent many an evening absorbing his musings about top-secret weapons systems.

But with both the war and the Nazis approaching, Hedy decided to flee her homeland - and her marriage - and booked passage to Hollywood aboard the Normandie, a ship she knew was carrying a very famous passenger, movie mogul Louis B. Meyer.

She was already a name in the industry. Hedy had become infamous for her racy performance in the foreign film "Ecstasy."

Not only was she nude, but a close-up of Hedy's face "in the precise moment of rapture" (as one critic tastefully put it) was considered nothing short of pornography.

But Louis B. Meyer liked what he saw.

"By the end of the voyage, she had arranged with him, a contract of $600 a week, which would be $3,000 today, with the proviso that she learn English," Rhodes said. "Which she pretty quickly did."

Her career took off. But the war in Europe was never far from her mind. And a chance dinner party with a Hollywood composer named George Antheil changed everything.

Like her, Antheil tinkered with ideas. He was famous for composing an avant-garde symphony using unconventional instruments, not the least of which were more than a dozen player pianos, all synchronized.

And that gave the two of them an idea: If pianos could be synchronized to hop from one note to another, why couldn't radio signals - steering a torpedo - hop as well? Their inventive partnership was born.

"Hedy's idea was if you could make both the transmitter and the receiver simultaneously jump from frequency to frequency, then someone trying to jam the signal wouldn't know where it was," said Rhodes.

The thinking at the time by all the experts that looked at it was that it was a viable idea. "This would have worked," said Rhodes. But when the Navy brass looked at the invention, "They said, 'What, you want to put a player piano in a torpedo? That won't work!' So they threw it on the back shelf. The Navy's response really was, 'You should go raise money for the war. That's what you should be doing instead of this silly inventing.'"

So Hedy did precisely that, using her celebrity to raise millions in war bonds - dismissed again for her brains in favor of her beauty.

As time went on, she tried television, but it never fit, and her star slowly faded.

But she watched in silence as other "frequency hopping" inventors took the technology to heights Hedy never could have imagined.

"Today, frequency hopping is used with the wireless phones that we have in our homes, GPS, most military communication systems - it's very widely used," said Rhodes.

But it was those building on her idea who got the credit. Hedy had quietly signed her patent over to the Navy, and left it at that. She gave the technology away, and never made a dime off of it.

"It seemed to her the very least they could do was pat her on the head and give her some acknowledgement," said Rhodes.

Finally, more than 50 years after her original patent, Hedy did FINALLY get some acknowledgment - even a few awards - but she didn't show up to accept them. By then, botched plastic surgery has left her mostly a recluse.

Hedy died alone in Florida at the age of 86. Her obituaries began with what everyone already knew, her beauty, and made only glancing references to the invention she had hoped would prove her mind was beautiful, too.

One couple's remarkable escape from slavery