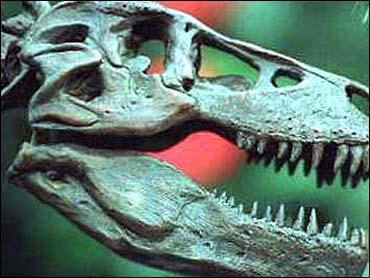 The bones of the mighty T. rex tell a lot about the great dinosaurs, but one major detail has been missing.

Which is the she rex and which the he rex?

Researchers think they have found the answer.

A team led by Mary H. Schweitzer of North Carolina State University reports finding a layer of medullary bone inside the leg bones of a Tyrannosaurus rex discovered in Montana.

Medullary bone is a calcium-rich layer that develops in the long bones of birds during the egg-laying process. It provides a ready supply of calcium to form eggshells.

Its presence inside this T. rex's legs indicates that the dinosaur was a female, Schweitzer said. The finding will enable researchers to determine the sex of at least some dinosaurs.

It also adds weight to the widespread belief that today's birds descended from dinosaurs.

Her findings are reported in Friday's issue of the journal Science.

"The discovery of medullary bone in a specimen of T. rex is hugely exciting," said Chris Dacke of the department of pharmacy and biomedical sciences at the University of Portsmouth in England. "It has never previously been reported in any other class of animal than birds."

Dacke, who was not part of Schweitzer's research team, said the finding "certainly helps cement the notion that birds are directly descended from dinosaurs." He said it also suggests that "dinosaurs, like birds, developed similar reproductive strategies for providing an adequate supply of calcium for the eggshell."

This discovery will not enable paleontologists to determine the sex of all dinosaurs because medullary bone is present only during the egg-laying cycle. But when present, it at least enables scientists to say that a particular example is female.

"We have 12 specimens of Tyrannosaurus rex here at this institution and we're about to find out if any more of them are female," said John R. Horner of the Museum of the Rockies in Bozeman, Mont.

Not every museum may want to check the sex of its specimens because it requires cutting a long bone in half, said Horner, a co-author of the paper with Schweitzer.

Even then, finding medullary bone is a long shot, Schweitzer said. First the dinosaur has to be an ovulating female. It also has to die before it has finished laying eggs and has to be fossilized. Finally, that fossil has to be found by humans.

The skeleton in which the medullary bone was found is the same one from which the researchers were able, for the first time, to recover soft tissue from a dinosaur. They reported in March the discovery of tissues including what may be cells and blood vessels from the skeleton.

The researchers said the medullary bone in the dinosaurs was more like that found in ostriches and emus than that of smaller birds.

Schweitzer also noted that the egg-laying process differs between birds and animals like crocodiles, which do not produce medullary bone.

In crocodiles, she said, the eggs all get hard shells at one time. In birds, the eggs develop hard shells one at a time and the medullary bone serves as a storehouse for the calcium needed during the egg-laying process.

The research was funded by North Carolina State University and grants from the National Science Foundation and Nathan Myhrvold.