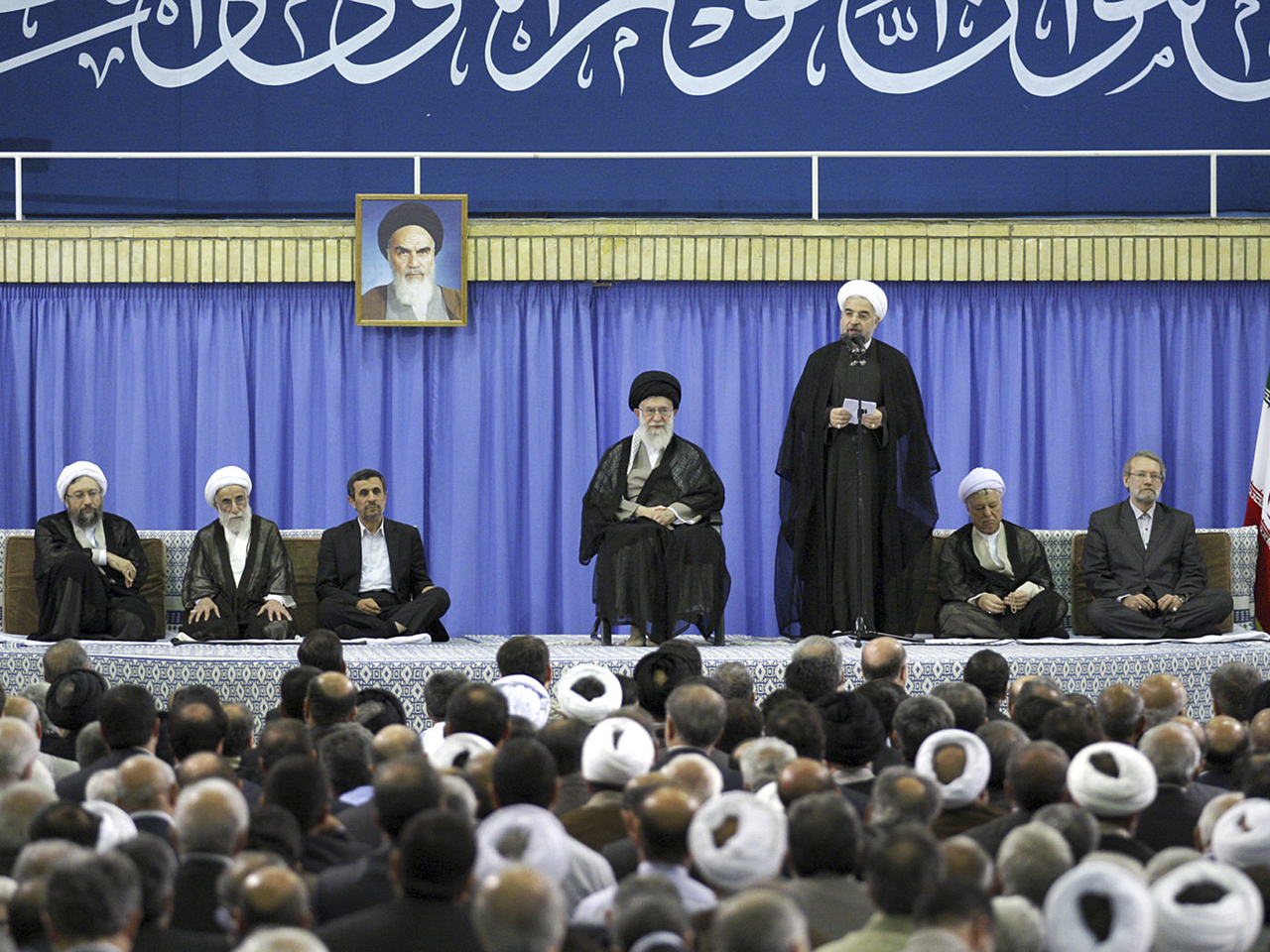 TEHRAN, IranIran's new president on Sunday called on the West to abandon the "language of sanctions" in dealing with his country over its contentious nuclear program, hoping to ease the economic pressures now grinding its people.

President Hasan Rouhani spoke after being sworn in as president in an open session of parliament Sunday, capping a weekend that saw him endorsed by Ayatollah Ali Khamenei, Iran's supreme leader.

Rouhani, a moderate cleric who won a landslide victory in the June 14 presidential elections, continued his call for dialogue with the West while asking foreign powers to respect Iran in its negotiations.

Iran is under United Nations sanctions as well as unilateral Western oil and banking sanctions over its refusal to halt uranium enrichment, a technology that can be used to power reactors producing electricity or build nuclear weapons.

Iran says its nuclear program is peaceful and geared towards generating electricity and producing radioisotopes to treat cancer patients.

In a statement, the White House said it hoped Rouhani would make good on pledges to resolve issues around Iran' nuclear program.

"On the occasion of Dr. Hojjatoleslam Hassan Rouhani's inauguration today as the Islamic Republic of Iran's seventh president, we again congratulate the Iranian people for making their voices heard during Iran's election," the statement reads. "We note that President Rouhani recognized his election represented a call by the Iranian people for change, and we hope the new Iranian government will heed the will of the voters by making choices that will lead to a better life for the Iranian people."

Rouhani replaces President Mahmoud Ahmadinejad, who struck a hard-line approach when dealing with the West and its sanctions over the nuclear program. The sanctions have hit the country's vital oil exports and blocked transactions on international banking networks. Inflation is running at more than 35 percent. The Iranian rial has lost more than two-thirds of its value against the U.S. dollar since late 2011.

Many Iranians and foreign diplomats hope that Rouhani, a former top nuclear negotiator, can strike a more conciliatory tone in negotiations. Those hopes could be seen by the attendance at his swearing in, as the audience included leaders and other representatives from more than 50 countries. It was the first time since Iran's 1979 Islamic Revolution that foreign dignitaries attended the swearing-in ceremony of an Iranian president.

"Should this new government choose to engage substantively and seriously to meet its international obligations and find a peaceful solution to this issue, it will find a willing partner in the United States," Carney said in a statement.

During his speech, Rouhani said Iran opposes "any change in political systems through foreign intervention." Iran is a close ally of Syrian President Bashar Assad, whose country remains in the grips of a bloody two-year civil war. Assad's government has received fighters from the Iranian-backed Hezbollah, helping government forces gain ground in recent weeks.

"Peace and stability in all neighboring regions is a need and necessity for Iran," Rouhani said.

While Rouhani has pledged a new era of openness and better relations with the West, many doubts remain.

Syria's state-run news agency SANA reported Sunday that Rouhani told Syria's prime minister that no force in the world would shake the alliance between the two countries. Syria has been Tehran's strongest ally in the Arab world since Iran's 1979 Islamic Revolution.

Rouhani also said that Iran is "not after changing borders and governments." He did not elaborate, but it appeared to be a reference to Israel, which other Iranian leaders have demanded be destroyed in the past.

Meanwhile, Rouhani also presented a list of ministers he wants for his Cabinet to parliament. The core of his team has figures whose academic pedigrees include institutions in California, Washington and London.

Rouhani proposed Mohammad Javad Zarif, a diplomat at Iran's U.N. Mission in New York for five years, to serve as foreign minister. He also proposed Mahmoud Alavi, a cleric and former lawmaker, as minister of intelligence and Hossein Dehghan, a former commander in the powerful Revolutionary Guards, as defense minister. Others include officials who served in the administrations of both reformist President Mohammad Khatami and centrist President Akbar Hashemi Rafsanjani.

Khamenei, however, has final say in all key matters, including Rouhani's key Cabinet posts. On Saturday, Rouhani received a kiss on the forehead from Khamenei, a blessing from the supreme leader.