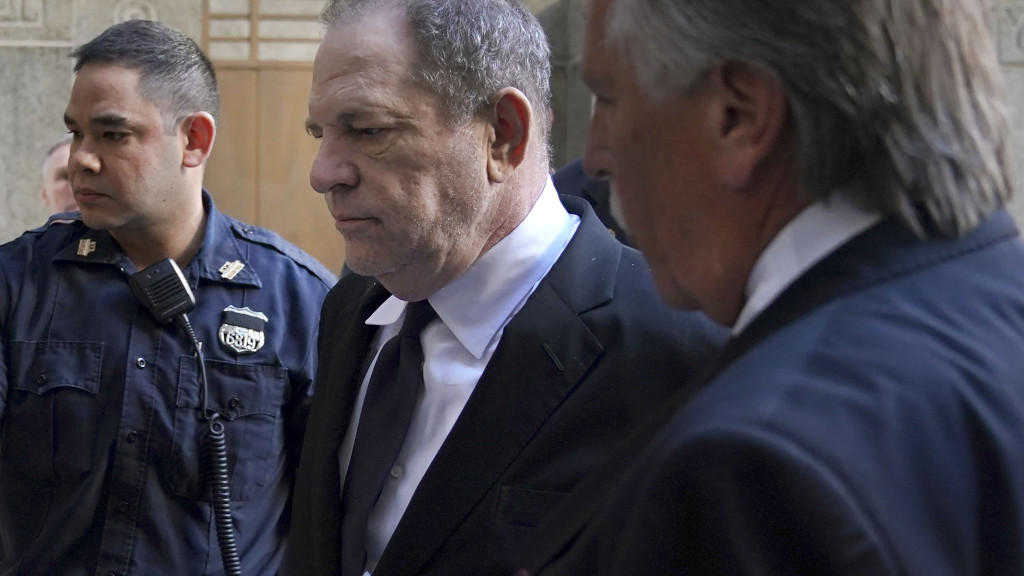 NEW YORK -- Harvey Weinstein, who was previously indicted on charges involving two women, was released on bail on Monday while fighting sex crime accusations that now include a third woman.

"We fight these battles one day at a time, and today we won this round," defense attorney Ben Brafman said outside court. Brafman said during an arraignment that he expects more charges.

Weinstein pleaded not guilty after he was brought into the courtroom handcuffed, then uncuffed for the proceeding.

An updated indictment unveiled last week alleges the movie mogul-turned-#MeToo villain performed a forcible sex act on a woman in 2006. The new charges include two counts of predatory sexual assault, which carries a maximum sentence of life in prison upon conviction.

Weinstein now faces a total of six charges connected to incidents involving three women. He was previously charged with first- and third-degree rape, and first-degree criminal sexual act for incidents involving two women in 2004 and 2013. All of the charges are felonies.

One of the other two accusers, who has not been identified publicly, told investigators Weinstein allegedly cornered her in a hotel room and raped her in 2013.

The other, former actress Lucia Evans, says she was allegedly forced to perform a sex act at his office in 2004.

Manhattan District Attorney Cyrus R. Vance Jr. said the 66-year-old Weinstein is charged with "some of the most serious sexual offenses" that exist under state law. Vance said the case is the result of a months-long ongoing investigation led by his office along with the NYPD.

"Mr. Weinstein maintains that all of these allegations are false and he expects to be fully vindicated," Brafman said.

Weinstein has been free on $1 million bail.

More than 75 women have accused Weinstein, who was one of the most powerful men in Hollywood, of wrongdoing as allegations detailed in Pulitzer Prize-winning stories last October in The New York Times and The New Yorker magazine swelled into the #MeToo movement.

Several actresses and models accused Weinstein of criminal sexual assaults. They include: film actress Rose McGowan, who said Weinstein raped her in 1997 in Utah; "Sopranos" actress Annabella Sciorra, who said he raped her in her New York apartment in 1992; and the Norwegian actress Natassia Malthe, who said he attacked her in a London hotel room in 2008.

Weinstein, who produced movies including "Pulp Fiction" and "Shakespeare in Love," has denied all allegations of nonconsensual sex, with his attorney challenging the credibility of his accusers.

The Associated Press generally does not identify people who say they are victims of sexual assault unless they come forward publicly.