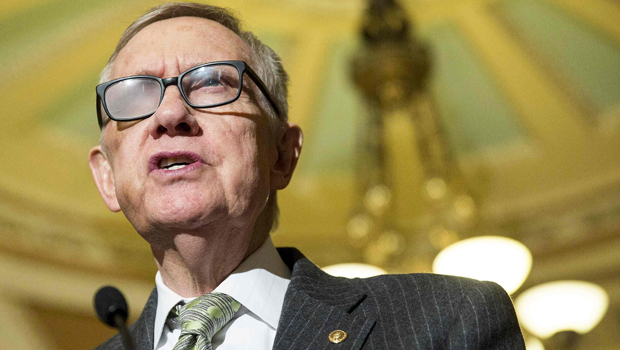 WASHINGTON -- Senate Minority Leader Harry Reid announced Friday he will not seek re-election to another term, saying he wanted to focus on bringing Democrats back to power in the Senate rather than his own re-election.

Reid, 75, said in a statement that it would be "inappropriate for me to soak up all those resources when I could be devoting those resources to the caucus, and that's what I intend to do." He stated that his retirement had nothing to do with being minority leader or his reelection prospects.

Still, Reid, first elected to the Senate in 1986, was considered one of the most vulnerable Democrats in a swing state. He turned back a challenge in 2010.

His announcement is sure to set in motion a scramble in the Senate's Democratic leadership lineup between his top two deputies, Sen. Chuck Schumer of New York and Sen. Dick Durbin of Illinois.

Schumer, the third-ranking Democrat, issued a statement praising Reid for "his strength, his legislative acumen, his honesty and his determination."

President Obama released a statement praising Reid, saying, "As the leader of the Senate Democrats during my time in office, Harry has become not only an ally, but a friend. I'm proud of all we have accomplished together, and I know the Senate will not be the same without him."

Later on Friday, Mr. Obama surprised Reid by dropping in on the senator's interview with Nevada Public Radio.

"I think that when the story is written and when all is told, you're going to have somebody who has done more for Nevada and for this country as anybody who's ever been in the Senate. And I could not be prouder of him," the president said. "He did an unbelievable job on a whole bunch of really tough issues -- saving this country from a depression; making sure millions of people have health care; making sure that young people were able to go to college. And he's been one of my best partners and best friends, and I'm really honored to have served with him."

"Harry is unique and he's got that curmudgeonly charm that is hard to replace," the president added. "I don't know anybody who understands more his roots, where he came from, what it means to not have anything when you're born, and scramble and scrape and work to get something. And he has never forgotten the path he took."

Reid, in his statement, also mentioned the Jan. 1 exercising accident that left him badly bruised and struggling to regain sight in his right eye, saying it gave him time to think about his political future.

"We've got to be more concerned about the country, the Senate, the state of Nevada than about ourselves," Reid said. "And as a result of that I'm not going to run for re-election."

As for filling his seat, Democratic Senate Campaign Committee Chairman Sen. Jon Tester, D-Montana, said in a statement "There is a talented pool of Nevada Democrats who are ready to step up to the plate, and we will recruit a top-notch candidate in Nevada who will be successful in holding this seat in 2016."

But Republicans pointed out in their own release, "With the exception of Reid, every elected statewide official in Nevada is Republican and this race is the top pickup opportunity for the GOP." The National Republican Senatorial Committee also said that "his retirement signals that there is no hope for the Democrats to regain control of the Senate."