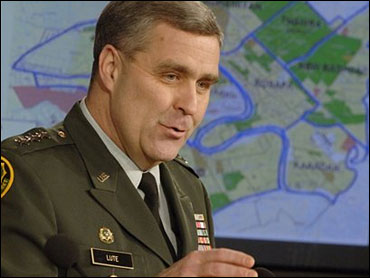 First response to the announcement of the appointment of Lieutenant General Douglas Lute to serve as "Assistant to the President and Deputy National Security Advisor for Iraq and Afghanistan" has been skeptical, and was even before the fact. The tag "war czar," which the administration eschews, was first touted by the Washington Post in April. It implies a level of power and authority far beyond anything contemplated or possible, as though Lute will personally be running the whole reconstruction effort in Iraq and Afghanistan. But we don't do reconstruction like that, not like we used to. The regrettable Paul Bremmer experience was quite enough. Check out General Douglas MacArthur's tenure as emperor by proxy in postwar Japan. He, my friends, was a czar.

So what exactly will Lute do? President Bush stated that he will be the "full-time manager for the implementation and execution of our strategies for Iraq and Afghanistan, and will manage the interagency policy development process for these two theaters." This does not mean he will be an overall commander of the military effort. Admiral William J. Fallon, as commander of U.S. Central Command, has operational command of U.S. forces in Iraq and elsewhere in the region, with General David Petraeus commanding Multi-National Forces-Iraq (MNF-I). Both outrank Lute, and report to the president through the secretary of Defense. Afghanistan is even more problematic, since primary responsibility for the 36 nation mission rests with the NATO-led International Security Assistance Force (ISAF), which is directed by the North Atlantic Council in Brussels, and the Supreme Headquarters Allied Powers in Europe (SHAPE). Lute will not usurp these reporting chains, or the responsibilities of the officers currently executing the new strategy.

Rather, Lute will try to get the various parts of the government that contribute to the war effort to do so more effectively by serving as the president's personal advocate in the interagency process. Sounds a lot less exciting than "war czar," doesn't it? But it is a vital task. It is a traditional role for the National Security Council, which unfortunately has not been very effective at it to date. The importance of this effort was reflected in a statement by General Petraeus before the Senate on January 23, 2007, discussing the new Iraq strategy:

The way ahead is designed to be a comprehensive approach. In carrying out the non-kinetic elements of this strategy… our soldiers, sailors, airmen, Marines, and civilians downrange must get all the help they can from all the agencies of our government. There is a plan to increase that assistance, and it is hugely important. This clearly is the time for the leaders of all our governmental departments to ask how their agencies can contribute to the endeavor in Iraq, and to provide all the assistance that they can. Our military is making an enormous commitment in Iraq. We need the rest of the departments to do likewise.

One gets the impression that the Defense Department is a bit resentful of the lack of effort on the part of the other government agencies involved in rebuilding Iraq. Petraeus, a principal architect of the new Army/Marine Corps counterinsurgency doctrine, understands that in a conflict of this type the "non-kinetic elements" — which is to say, those activities that do not involve killing people and breaking things — are essential to bringing about a successful reconstruction. Yet, those agencies most able to provide leadership in these areas have either failed to step up to the challenge or would be willing to do so if they knew how to work constructively with the military.

This is an area in which Lute can be very effective. He has wide experience in the region and is very knowledgeable about the new strategy and its needs. As the president's voice in interagency deliberations he will reportedly have "tasking authority," but this does not mean he will be ordering around cabinet secretaries at will. His primary power will be persuasion. Lute is a good man for the job; he is likeable and erudite, and conveys a sense of confidence. The fact that he is not as well known as some of the other, higher-ranking men reportedly considered for the job actually works in his favor, because he will be perceived as less threatening to some of the egos involved.

Since Lute will not have direct control over budgets or personnel he will have no way to discipline the process if some of the players get their backs up. Though perhaps in that case the president might intervene personally and unceremoniously fire a few of the recalcitrants. There is a school of thought that the unwillingness of the Bush administration to get rid of underperforming appointees has been the root of most of its problems, particularly with respect to Iraq. If they send Lute out into the interagency wilderness without some form of top cover that communicates in language that bureaucrats can understand, the effort is doomed to failure. If simply making appeals to agencies to do their duty for the cause was effective, the war would have been won a long time ago. What is called for is a more revolutionary approach to interagency coordination, one with concrete, timely consequences for those who won't get with the program. I say we need less czar, and more Lenin.
By James S. Robbins
Reprinted with permission from National Review Online