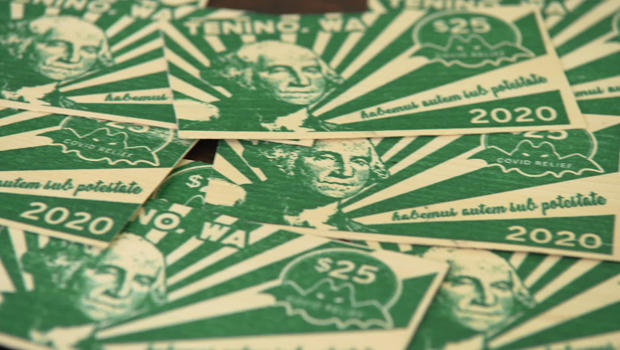 Like a lot of small towns, Tenino, Washington, was hit hard economically by the COVID shutdown. Residents like Laurie Mahlenbrei, an out-of-work schoolbus driver, have been struggling. "It's been really difficult," she said. "I mean, I've been washing windows, scrubbing floors, cutting down trees, mowing lawns, whatever I can for a buck."

But there's something unusual going on in this town of 1,800 people. The city government of Tenino is doing what it can to help folks like Mahlenbrei, not with a check, or even a debit card, but with – believe it or not – a pile of wood.

"Every once in a while I run into a cashier that hasn't taken it before," said Mahlenbrei. "But it's just a blast, you know? I mean, I'm paying for food with something historical, you know?"

That's right: the town is printing its own money, $10,000 worth, on thin sheets of wood that can only be spent in Tenino.

And it's not the first time. In fact, the city issued its first wooden currency way back in 1931, during the Great Depression.

Loren Ackerman, the president of the Tenino Depot Museum, is the only person in town who knows how to operate the 19th century machine that printed Tenino's Depression-Era currency. "You're literally printing money," said correspondent Luke Burbank.

Is this totally legal? "We think so," said Wayne Fournier, a firefighter and Tenino's mayor. "They haven't called us yet! Maybe after this story, they'll give us a call and let us know we should stop."

Fournier said when the idea came up to start printing wood "scrip," as it's called, he had to do some research. "I started by googling what money is, it just started out as simple as that," he laughed. "What the concept is, what currency is, what fiat currency is, trying to understand those things and wrap my mind around 'em, You know, all the information's out there on the internet."

"You're the mayor of this city," said Burbank. "The city has a history of doing its own currency when times get tough, and yet when you're gonna try to actually do it yourself, you had to kinda, like, google it and figure out how it works?"

The wood money has drawn attention from all over the world. But lest anyone chalk it up as just a joke or a publicity stunt, it's been much more than that to people like Laurie Mahlenbrei.

"It's been a godsend, you know?" she said. "I mean, I could buy things that I couldn't buy because, like I said, I was scrapping for any kind of work I could get. I was barely being able to buy food."

When Burbank caught up with her, Mahlenbrei was buying groceries with her wooden money. But she could have also paid her water bill with it, got her prescriptions filled at Hedden's, the town drug store, or even had a tasty meal at Don Juan's Mexican Kitchen.

"As humans, when stuff like this happens, we go into survival mode, and we start thinking, 'Okay, so these are my expenses. Can I dine out? Probably not,'" said Marcela Martinez, whose family owns Don Juan's. "So, I think this money has allowed people to have that. And even people who probably really do need it, who need to have their groceries every week and couldn't afford it, I think that this wooden money really helped them."

The money also helps Tenino's businesses, when they redeem the bills with City Hall for regular cash.

With all the attention the money is getting – each bill is numbered, signed, and features a rough Latin translation of the phrase "We've got this handled" – collectors have been reaching out, hoping to get their hands on some.

But good luck getting Laurie Mahlenbrei's share: "I have actually been offered up to $300 for it," she said. "But I won't sell it, because first of all, it's meant to be here in the community, stay in the community. It was meant for a boost for us and for the businesses. And second of all, it's too much fun spending it!"