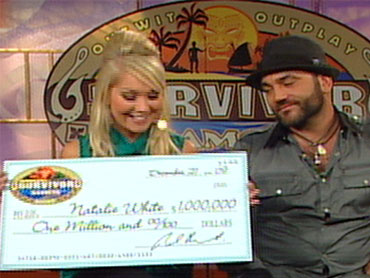 "Early Show" substitute co-anchor Chris Wragge asked White, "What is it like sitting next to such a gracious loser?"

White responded, "Russell is a character. Again, everybody is going to see a different game than what we actually play and ultimately, the person that wins and deserves to win is the person that gets the majority of the jury vote."

Sitting next to White, holding an oversized check for the $1 million, Hantz interjected, "You know, when you play a football game, and you're the quarterback to the football game, I'm throwing all the touchdown passes, right? She wasn't even on the field. She was my cheerleader."

But White, the 26-year-old winner of the 19th season of the CBS reality show, unshaken by his words, said, "Guess what? I'm going to laugh all the way to the bank."

White also received the actual check on the broadcast. White said she plans to spend some of the money on a vacation with her boyfriend. She said she wants to save the rest.

Glor added, "How about a nice big order of humble pie for the man sitting next to you."

Anyone who judged White by her looks made a big mistake. Early on her teammates discounted her as an empty-headed beauty queen. But she truly had killer instincts, even killing a rat in the Samoan wilderness.

Hantz said during the game, "My tribe will believe anything I tell them at any point. Because they're just stupid. You can call me the Puppet Master. They can be my little puppets. They'll run when I tell them to run, they'll walk when I tell them to walk. When I'm finished with 'em, just throw 'em in the trash."

By some accounts, Hantz may have been the greatest player in "Survivor" history. But he made a fatal mistake. He had too many enemies on the jury.

Then turning to Natalie, Cardona said, "People will call you weak. People will say you are undeserving. Why are those characteristics any less admirable as lying cheating and stealing?"

The jury took their revenge on Hantz and rewarded White for playing the game beautifully.