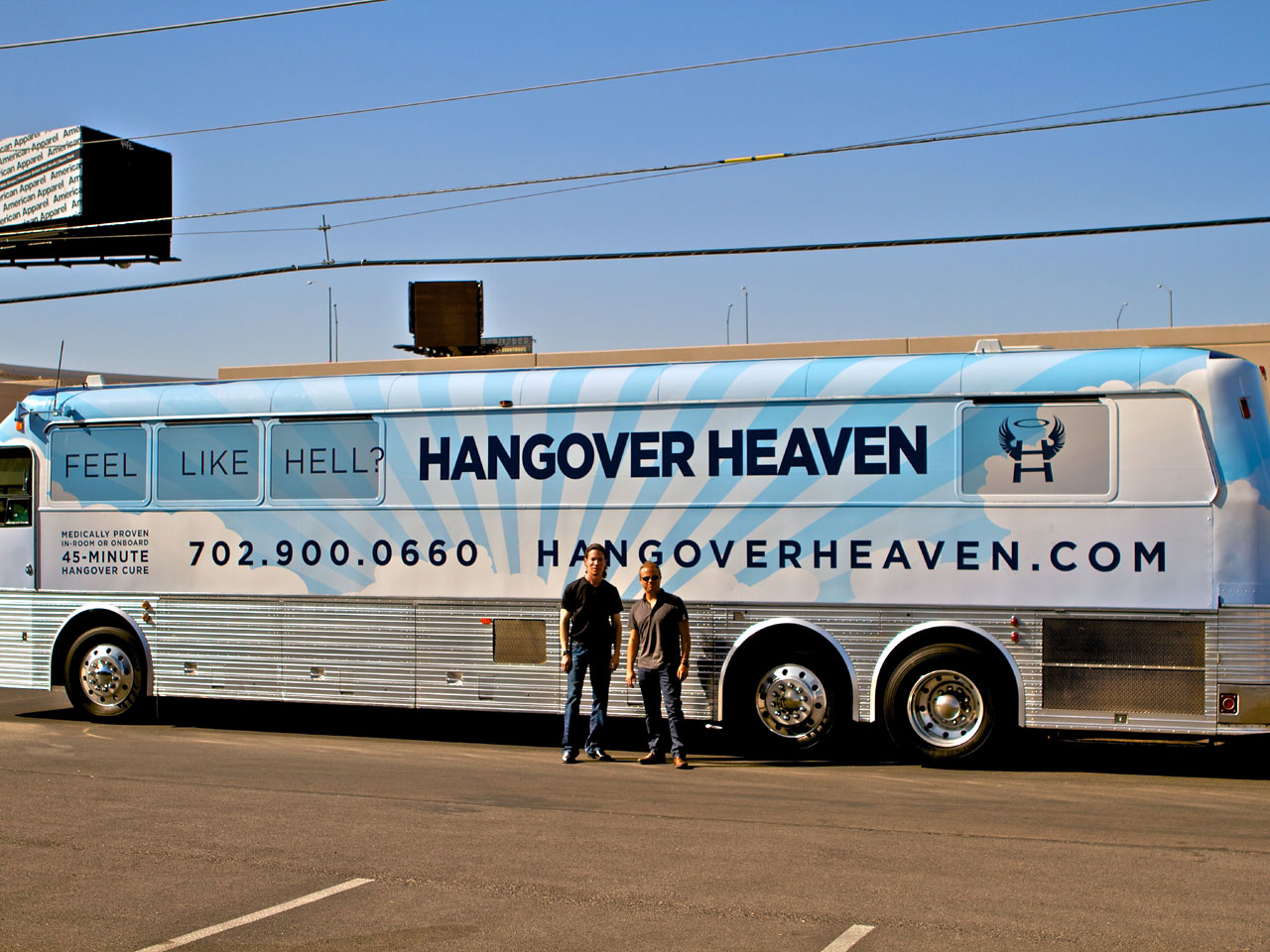 (CBS News) Had a long night of partying and need some relief? Jump on board the Hangover Heaven, the Las Vegas "after-party bus" that promises to cure your hangover.

Hangover Heaven is the brainchild of Dr. Jason Burke, a board certified anesthesiologist, who claims to the U.S.'s first  "hangover specialist." With his patented technique, he said he can cure 95 percent of hangovers in 45 minutes - with the patient feeling relief in just 20.

"People here start drinking at noon and drink until 2 a.m., and they don't want to be miserable in their hotel rooms. They want to go on a helicopter ride or go shopping," Burke told HealthPop. "Hangovers also tend to be worse in Las Vegas because of the dry climate."

So, how does the treatment work?

After dealing with numerous hangovers himself after just two or three glasses of red wine and watching many people come into the hospital with similar symptoms, Burke realized a regimen that includes intravenous (IV) hydration and anti-inflammatory drugs relived his symptoms quickly. He says he's not using any specially mixed concoctions: Burke claims they are the same drugs used in hospitals up to 10,000 times a day.

The bus, which has two lounge areas and six bunks, travels up and down the Las Vegas Strip, stopping at popular hotels to pick up patients. There are three different kinds of treatments you can get: salvation, redemption and in-room treatment. Salvation, "the holy grail," will typically cost $200, Burke says. Participants would get intravenous hydration, anti-nausea, anti-inflammatory medications and vitamin supplementation.

If you lost too much at the craps table, you can opt for redemption. The $130 service will give you the intravenous hydration to flush away the poisonous alcohol from your system. Right now, both services are discounted as a special launch offer.

But, if the hangover is so bad you just can't crawl out of bed to the bus, think about having the doctor stop by your hotel room for a visit. You'll get the whole package of treatments for just $500 for the first person, and then $375 for each additional friend.

If it sounds expensive, it's because all the drugs Burke uses are FDA approved, and there are fully trained medical staff and medical services on hand. "It's not an inexpensive service to provide, especially to do it well," he said.

While the hangover cure can be a quick way to be chipper once again, Burke said that there are some things drinkers can try to have a less painful morning. Drinking clear alcohol like gin and vodka seems to produce less painful hangovers than drinks with whiskey and bourbon. Try and drink a glass of water between drinks, and pop a multivitamin before you go to sleep. Most importantly, try to sober up before getting some shut eye.

Also, Burke says the treatment might not be for everyone, including those who have type 1 diabetes, kidney disease, people with severe gastrointestinal issues and women who are pregnant. But, since most of those people shouldn't be drinking in the first place, Burke confidently believes it will work for almost all drinkers. Still, his company takes a complete medical history before administering anything.

Dr. Noah Rosen, director of the headache center at the Cushing Neuroscience Institute in Great Neck, N.Y., cautioned to HealthPop that there is a risk - albeit small - when using an IV, especially when it's done incorrectly. He is not associated with the Hangover Heaven company. Overall though, Rosen said just a simple invtravenous solution has been known to help a hangover, although nothing can completely get rid of the alcohol in your system.

"I think the (hangover cure) doesn't replace judgement. Anyone should be drinking responsibly. I think that the possibility that this should help shouldn't change responsible drinking," he said.

"The majority of people have been very positive. They are in Vegas, the want to have a good day," Burke said, adding that because of interest, they may be expanding to other cities soon.

But the creators still warn in a disclaimer that people should drink in moderation.

It reads, "Alcohol overdose can kill you and Hangover Heaven cannot reverse death."

What do you think of the hangover bus?