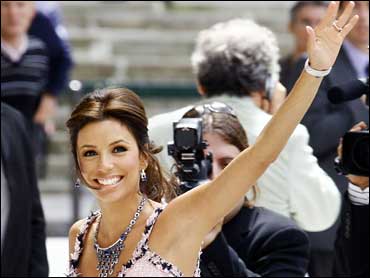 President Bush will not touch the Social Security or Medicare portion of the budget surplus for spending increases or tax cuts, no matter what the new surplus predictions are, his top economic advisers say.

Democrats say the lagging economy and the tax cuts' cost increase the need to dip into those accounts. But administration budget director Mitch Daniels said Sunday on CNN's "Late Edition" that the Social Security and Medicare accounts "will be identically as large, completely unaffected, as though there had been no tax cut passed this year."

The White House has been rebutting Democratic charges that Mr. Bush's 10-year, $1.35 trillion tax cut has drained too much of the surplus to meet government spending priorities.

The revised surplus for fiscal 2001, which ends Sept. 30, is expected to be about $160 billion, trailing only last year's $237 billion. But that would be much lower than the $275 billion surplus projected earlier this year.

Lawmakers have generally agreed to set aside the Social Security and Medicare portions of the surplus. Doing so, however, means there probably will not be much left for spending increases or tax cuts.

"That surplus is all but evaporated, and now we are knocking on the door of raiding the Medicare and Social Security trust funds just to maintain the expenses of government," said Sen. Richard Durbin, D-Ill.

On Wednesday, the White House Office of Management and Budget will release its updated 2001 budget outlook, which will show the effect of $38 billion in tax cut checks and lower tax revenue due to the sluggish economy.

Democrats said in a letter to Mr. Bush last week that the new numbers will demonstrate the threat to Social Security and Medicare.

Click here for a closer look at the Bush presidency.
Click here for a closer look at U.S. taxes.
"We said at the time th tax cut passed that we thought it was too large and too unfocused and it would cause us to go into Social Security and Medicare, and that's what's happening right now," House Democratic Leader Dick Gephardt of Missouri said on NBC's "Meet the Press."

The Congressional Budget Office, on whose outlook Congress depends, also is expected to issue new projections by month's end.

The administration also has made an accounting change that would free $4.3 billion for Congress to use for spending or cutting taxes.

The presidential advisers suggested that the economy, not the budget, should be the concern.

Administration officials predicted the economy will revive by year's end and into 2002, thanks to Bush's actions.

"We expect to see, along with virtually all other forecasters, a pickup late this year and through next year," Daniels said.

"Thanks to the tax cuts, we have put a stop to what was a rapidly falling economy," Lindsay said. "I think that the actions of the Congress, president and the Federal Reserve combined will return this economy to growth next year."