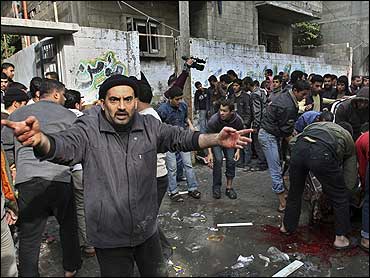 This story was written by CBS News' George Baghdadi, reporting from Damascus

The Hamas leadership rejected on Thursday an Egyptian truce plan for the Gaza Strip saying it lacked the "valid basis" that would secure Israel's pull out of the Gaza, reopening all border crossings and lifting the blockade against the Palestinians.

A statement by the Damascus-based ten Palestinian factions, including Hamas, said they "didn't see in the Egyptian initiative any valid basis for any acceptable solution as it includes articles deemed risky for the Palestinian resistance and its future."

It added that the aim of the Egyptian move was "to impose restrict on the resistance movement, blockading it while giving the enemy the free hand. The initiative could only help the enemy achieve the results they are unable to attain so far."

The Palestinian factions said it questioned the participation of Arab parties in the plan, but didn't name these countries.

A two-man delegation of Emad al-Alami and Mohammed Nasr flew back to Damascus on Wednesday night after having lengthy talks in Cairo with Egyptian officials, including intelligence chief Omar Suleiman, to discuss the initiative with Hamas's Syrian-based leadership.

The plan hopes to install a temporary cease-fire followed by an official truce, the securing of Gaza's border and the opening of crossing points to and from the isolated territory.

The factions reiterated in the statement their demands of "stopping the aggression, immediate withdrawal, lifting the siege and opening the crossing points, particularly Rafah." They also rejected the idea of deploying international observers in Gaza.

Israel, responding to a worldwide outcry over the punishing toll on Gaza's 1.5 million people, suspended its offensive Wednesday to allow humanitarian agencies to distribute relief supplies. Israeli officials said such brief lulls would be declared daily.

It was the first letup in an Israeli assault that has killed more than 700 Palestinians, of whom the United Nations says more than 400 are civilians. Ten Israelis have been killed since the fighting began, three of them civilians struck by continuing Palestinian rocket fire into Israel. 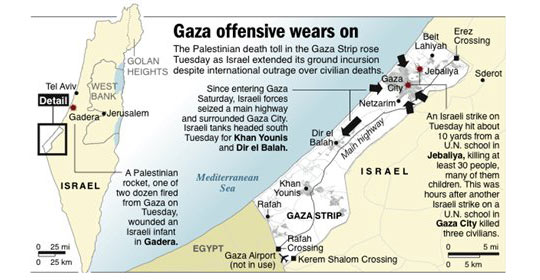