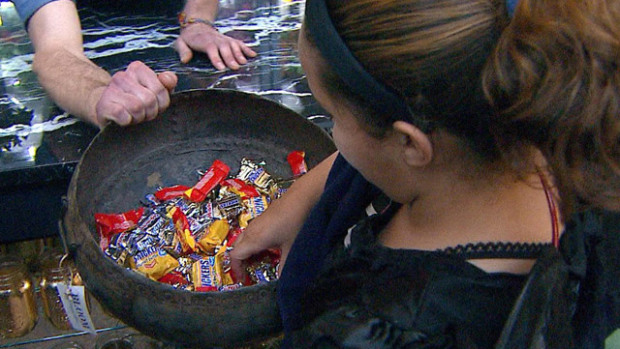 DENVER - Denver-area authorities said Monday they received no reports of children accidentally eating pot-laced candies this Halloween. Police had warned parents to be on the lookout for the edibles, which can look almost identical to brand-name treats.

The popularity of pot candies in the new retail market in Colorado prompted warnings this fall from police in Denver, Fort Collins and Pueblo.

Denver Police and the Rocky Mountain Poison and Drug Center reported no cases of people slipping marijuana to unsuspecting trick-or-treaters.

Greenwood Village Police Chief John Jackson says the educational campaign helped. His department in suburban Denver received no reports of children accidentally consuming the drug or parents finding it among their candy stashes.

"It's just another area where we have to be really vigilant from now into the foreseeable future so we don't have a problem," Jackson said. "Now, you're not just looking for razor blades anymore."

Joe Hodas, of marijuana edibles company Dixie Elixirs, said the warnings were "overblown and ridiculous." Parents should scrutinize their kids' Halloween candy but most people who use edibles are diligent about keeping them away from children, he said.

"We're relieved but not surprised as to the results of Halloween," Hodas said. ""There's a tremendous amount of misinformation directed at trying to scare people about the products."

In Washington state, the only other state with legal recreational pot sales, officials have been more circumspect. A sheriff's detective in Pierce County, Washington wrote a newspaper column saying pot showing up in treat-or-treaters' bags was an urban myth, partly because edibles are expensive and hard to get.

"I think there was some fear-mongering going on there," said Drew Fowler, a spokesman for the Seattle Police Department, which also saw no pot-infused candy winding up in trick-or-treaters' bags.

The Washington Poison Center, which last week warned parents to be on the lookout for cannabis candy, did not immediately return messages left Monday asking whether it had received any reports.