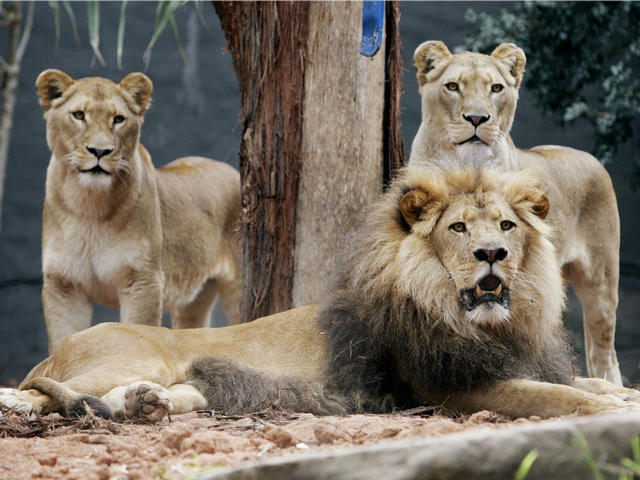 Nearly half of all of Africa's lion populations could face extinction in the next 40 years if conservation measures aren't changed, according to a new study.

The study, published Wednesday in the journal Ecology Letters, found that lion populations that were fenced into conservation areas rebounded in recent years, whereas lions in open preserves were challenged by prey loss and predation by human neighbors.

"Lions in fenced reserves tend to do much better, they're achieving much better populations," said Luke Hunter, a conservation biologist with Panthera, an organization that works to protect endangered big cats. "It's also cheaper to achieve those outcomes."

Lion populations have been shrinking across Africa as they rub up against growing human populations. Herding cultures, such as the Maasai or the Zulu, may convert wild habitat to grazing land, thereby reducing the population of natural prey for the majestic cats. So instead of going after a zebra, lions will hunt people's livestock (and occasionally kill people).

"More and more people live in fairly rural areas where there is wildlife, but those people rely on livestock, so they&re really coming into conflict often with lions," Hunter told LiveScience. "They just see them as a really dangerous enemy." [In Photos: A Day in the Life of a Lion]

To understand what strategies might best protect lions, Hunter and a few dozen colleagues analyzed lion population data from 42 sites across Africa. Some parks reported 46 years of data, whereas others had only three years of data.

They then compared the population trajectories with fencing, the money allocated to conservation and nearby human population density.

Unfenced lions, by contrast, faced attacks by neighboring people, poaching and declining prey populations. Nearly half of the populations will dwindle to near extinction levels in the next 20 to 40 years if no conservation measures are taken, the study showed.

Don't fence us in

But while the fencing is incredibly effective for preserving lions, not every conservationist loves them, Hunter said.

"I would hate to see more of Africa fenced," Hunter said. "It just takes away from a sense of wilderness."

Fencing can disrupt the great migrations of herbivores and the movements of free-roaming animals such as the African wild dog or the cheetah, he said. But it may be the most effective way to save lions, he said.

"Whether it's a fence or some other form of barrier it's really clear that lions need physical separation from people if we're going to save them."