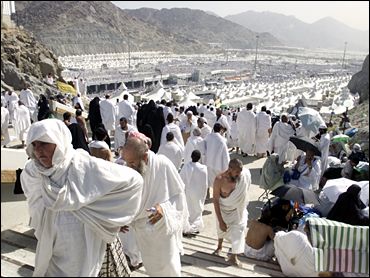 After 14 pilgrims were trampled to death during the exercise, Saudi authorities overseeing the annual holy Muslim hajj have stepped up their emergency plans. Fifteen other pilgrims were treated and released after sustaining injuries in a stampede at Mina, the site of deadly accidents in past years.

"We have increased the level of coordination among all concerned authorities to avoid what happened this morning," said Othman al-Maymani, Mecca's province health affairs director.

Al-Maymani said ambulances could not reach the site quickly due to the heavy traffic jam caused by nearly 2 million pilgrims gathering to perform the ritual.

"We were all focusing on the area where the three stone pillars are and did not pay much attention to areas nearby in which the incident took place," he told The Associated Press. "We will make sure that does not happen again. We have to learn from our lessons."

The pilgrims, who crammed the streets under a scorching sun, gathered around the pillars to throw seven pebbles and chanted "Allahu Akbar," Arabic for "God is Great." The ritual, performed in the tent city of Mina outside Mecca, will be repeated over the next two days as the hajj winds down.

"This is my third time to perform the hajj, yet I feel as light as a feather, as if I am newly born," said Wahba Abdel Aziz, a 36-year old Egyptian civil engineer. "I wish that God would accept my pilgrimage and wash my sins away."

Able-bodied Muslims are required to perform the hajj at least once in their lives if they can afford it. The ritual begins in the nearby holy city of Mecca, birthplace of Islam and its seventh-century prophet, Muhammad. The hajj is a spiritual journey that, according to Islamic teachings, cleanses the soul and wipes away sins.

More than 700,000 pilgrims from inside Saudi Arabia joined about 1.5 million foreigners in this year's hajj.

Saudi police and medical services watched over the area, which has been a scene of disasters in previous years.

Tuesday's ritual also marked the beginning of the leading Muslim holiday Eid al-Adha, or the Feast of the Sacrifice. To celebrate the occasion, pilgrims and Muslims around the world slaughter a camel, sheep or cow to commemorate God's giving Abraham a ram to sacrifice in place of his son.

Pilgrims also can pay $100 at government-supervised outlets that slaughter the animals and distribute the meat to the needy worldwide. "We have been working constantly for three days," said Hani Bayounis, who works at one of the outlets.

Celebrations around the Islamic world include greeting friends and relatives, distributing food and sweets and visiting graves of deceased relatives. In Cairo, families boarded Nile river boats and headed out for a relaxing day off.

The Iraq crisis has overshadowed this year's hajj and feast, with Muslim leaders in Lebanon canceling traditional Eid al-Adha receptions where government and religious officials usually exchange holiday greetings. The move was a show of sympathy for Iraq.

Holiday sermons in Beirut called on Arabs and Muslims everywhere to unite and prepare for the consequences of a U.S.-led war now widely seen as inevitable.

Sunni Muslim Grand Mufti of Lebanon Sheik Mohammed Rashid Kabbani delivered a scathing attack against an America he said was driven by "mad interests, aspirations and … the vanity of its power."

"Iraq has been dying for a long time, dying a slow death," Kabbani said. "They (Americans) place themselves above humanity and want to drag the whole world behind them. They want to impose their ideas, methods and ways of living."

"America, Britain and Israel are the devils in our world," said Saleh Assad, an Iraqi pilgrim. "I cursed them along with traitor Arab and Muslim leaders who are supporting them in their campaign against Iraq."

Anti-U.S. sentiment is running high in the Muslim world because of the threat of war and American policies on the Israeli-Palestinian crisis. Many pilgrims have expressed dismay at what they see as campaigns against their faith — and at their own leaders for allying with the United States.

In Western capitals, the hajj has also taken on more than a religious significance: both the United States and Britain have increased security measures because of what they say are terrorist threats linked to the annual pilgrim festival.

London Tuesday placed hundreds of troops and several tanks near Heathrow Airport, citing such a threat, and the United States upgraded its terror threat status to orange last week because, the administration claims, it intercepted "chatter" among suspected terrorists referring to the end of the hajj.