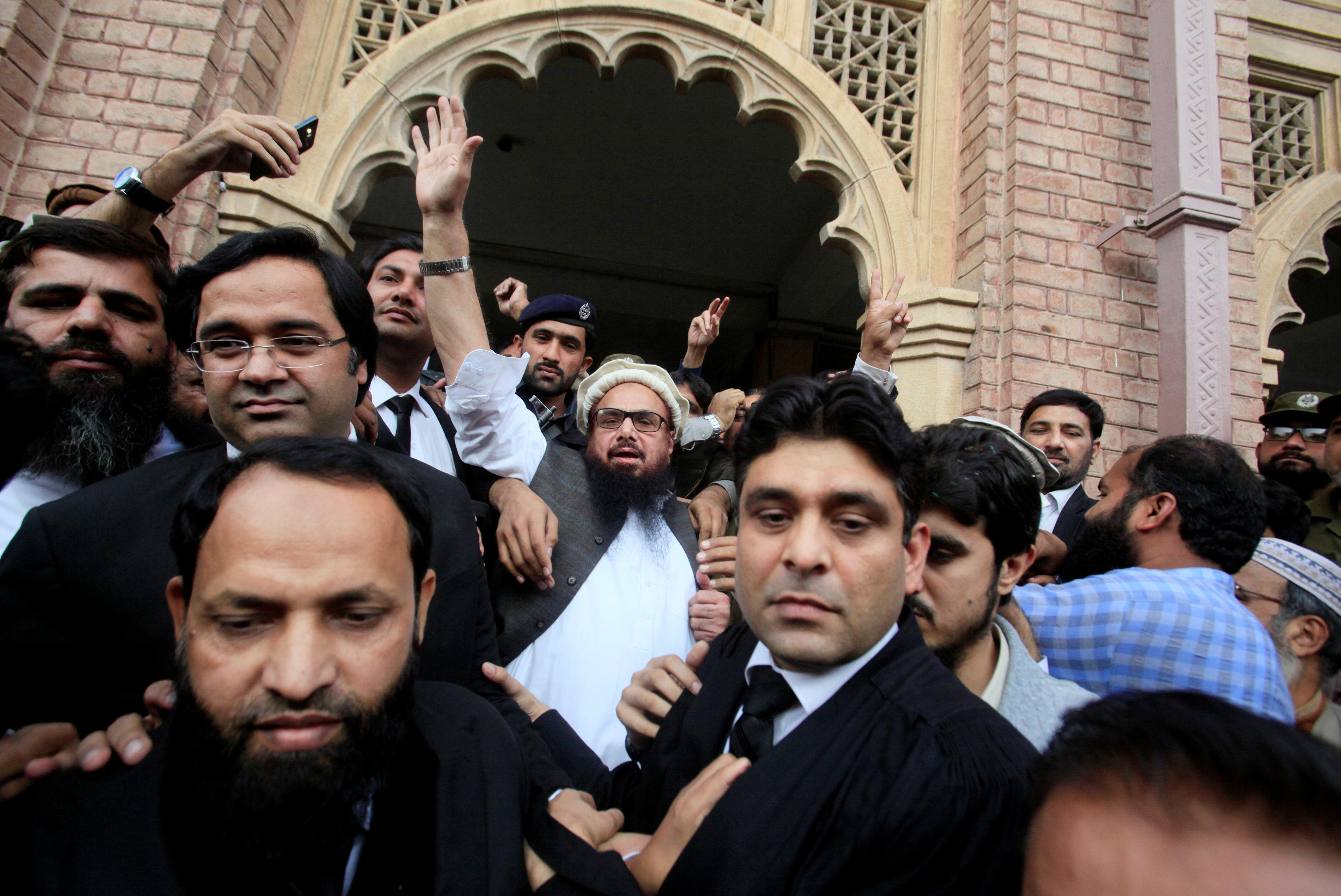 Hafiz Saeed, who has been designated a terrorist by the U.S. Justice Department and has a $10 million bounty on his head, was released before dawn after the court this week ended his detention in the eastern city of Lahore.

The move outraged the U.S. and Indian authorities, but Saeed's spokesman Yahya Mujahid confirmed his release, calling it a "victory of truth."

"Hafiz Saeed was under house arrest on baseless allegations and jail officials came to his home last night and told him that he is now free," he said.

Saeed ran the Jamaat-ud-Dawa organization, widely believed to be a front for the Lashkar-e-Taiba militant group, which India believes was behind the deadly attack in Mumbai.

In a statement, State Department spokeswoman Heather Nauert said the Lashkar-e-Taiba group was a designated foreign terrorist organization responsible for the deaths of hundreds of innocent civilians in terrorist attacks, including a number of American citizens.

"The Pakistani government should make sure that he is arrested and charged for his crimes," she said.

Pakistan has been detaining and freeing Saeed off and on since the attack, and he and four of his aides were put under house arrest in Lahore in January under a vague law known as Maintenance of Public Order. His release came after a three-judge panel dismissed the government's plea to continue his house arrest, which ended Thursday. His aides had been released earlier.

Saeed is known for publicly supporting militant groups fighting Indian rule in Kashmir, which is split between Pakistan and India and is claimed by both. Many in the Indian-controlled portion favor independence or a merger with Pakistan and violence has increased in Indian-controlled Kashmir in recent years.

In recent years Saeed often addressed protest rallies, asking the world community to pressure India to give the right of self-determination to the people in Kashmir.

Hours after his release, he addressed a congregation of thousands of followers at a sprawling mosque in Lahore and asked Islamabad not to hold talks with India unless New Delhi agrees to a troop withdrawal from Indian-controlled Kashmir.

Saeed said he was detained for highlighting the Indian atrocities in Kashmir, but Pakistan's independent judiciary freed him because allegations against him were baseless.

"I am not struggling for any personal gains. My struggle is aimed at safeguarding the interests of Pakistan. I want Kashmir's freedom from India and this is my crime. I was arrested for it," he told worshippers, who chanted "God is Great."

In an emotional speech, Saeed said Pakistan's former prime minister Nawaz Sharif was ousted from power for his "betrayal" of the Kashmiri people. He did not explain, but Sharif was removed from office in July for alleged corruption.

Earlier, supporters welcomed Saeed on his arrival at the mosque by showering him with rose petals.

Saeed's release angered neighboring India, which for years has asked Pakistan to take action against all those linked to the Mumbai attack. It is widely believed that Pakistan has long tolerated Lashkar-e-Taiba and other Islamic militant groups.

India's External Affairs Ministry spokesman Raveesh Kumar in a statement expressed outrage that a "self-confessed and UN proscribed terrorist was being allowed to walk free and continue with his evil agenda."

"He was not only the Mastermind, he was the prime organizer of the Mumbai Terror Attacks in which many innocent Indians and many people from other nationalities were killed," the statement said.

Kumar said Saeed's "release confirms once again the lack of seriousness on the part of Pakistani government in bringing to justice perpetrators of heinous acts of terrorism."

India has said it has evidence that Saeed was involved in the Mumbai attack, but Islamabad has long said sufficient evidence is not available to charge him. India claims the attackers were in contact with people in Pakistan when the assault was underway.

Relations between Pakistan and India were strained after the attack on India's financial hub. Indian authorities detained one of the assailants, Mohammed Ajmal Kasab, who was sentenced to death and later hanged in the city of Pune in India. While in custody, Kasab confessed that Lashkar-e-Taiba was behind the attack, which shocked the international community.

Kasab was the only surviving gunman from the coordinated three-day attack, which targeted two luxury hotels, a Jewish center, a tourist restaurant and a crowded train station. Nine other gunmen were killed during the siege.

India has said the attackers entered Mumbai by boat carrying cellphones, grenades and automatic weapons. The attack was broadcast live on television.

Pakistan often says India is violating human rights in Kashmir, where security forces have killed or wounded dozens of protesters at anti-India rallies in recent months.