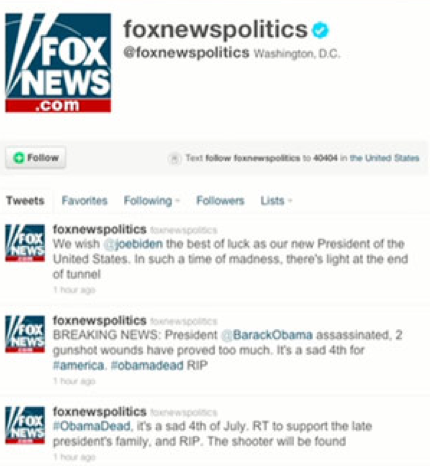 Fox News was the latest victim of a hack, with a posting Monday on its political Twitter account - @foxnewspolitics - saying President Obama had been assassinated in Iowa, the shooter unknown and that Joe Biden replaced him.

The series of six tweets showed up early Monday morning on the account, which has more than 36,000 followers. Fox News issued a statement calling the tweets "malicious" and "false," and said the hacking incident is under investigation.

The tweets are still visible on the @foxnewspolitics Twitter page as of 11:00 AM ET Monday.

The Guardian reported that a representative of the group 'Scriptkiddies' claimed responsibility:

"We are looking to find information about corporations to assist with antisec [a concerted hacker attack on corporate and government security]. Fox News was selected because we figured their security would be just as much of a joke as their reporting."

FoxNews.com said that it alerted the U.S. Secret Service, and the company is working with Twitter to address the situation.

"We will be requesting a detailed investigation from Twitter about how this occurred, and measures to prevent future unauthorized access into FoxNews.com accounts," said Jeff Misenti, vice president and general manager of Fox News Digital.