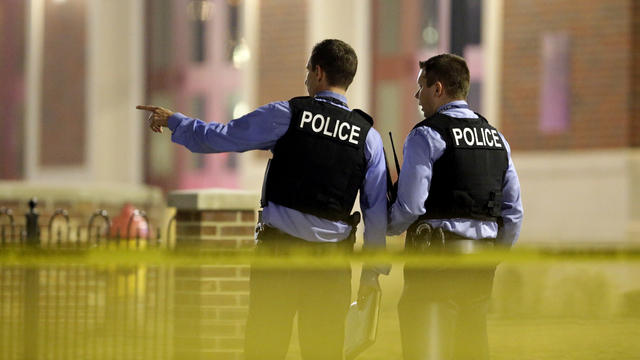 It’s been more than two years since Ferguson, Missouri erupted in violence after the police shooting death of Michael Brown. Since then, the city has agreed to overhaul its police department to restore public accountability. But there are few checks in place to keep problem cops off the streets across the nation, reports CBS News correspondent DeMarco Morgan.

They’re known as “gypsy cops” – police officers with questionable records that leave one department, only to be hired by another. One officer remains on the payroll in Ferguson, Missouri, where one woman says enough is enough.

Last November, 43-year-old Angelique Kidd was approached by police officer Eddie Boyd after a hit-and-run outside her home in Ferguson, Missouri.

“He said, ‘Well you have to get out of here, you have to go,’ or something like that, and I said,  ‘What was your name?’ And that’s when he arrested me,” Kidd said.

“And why did you want to know his name?” Morgan asked.

“I felt that I needed that information because he just -- he wasn’t doing what he was supposed to be doing,” Kidd said.

Kidd was arrested for disobeying the officer’s orders. That charge is still pending.

In December, Kidd, who is being represented by ArchCity Defenders,  filed a lawsuit claiming the arrest violated her civil rights, causing her “fear, anxiety, depression” and “emotional distress.”

Kidd’s suit is the latest in a string of complaints against officer Boyd, beginning when he was employed by the St. Louis Police Department.

The following year, he was accused of beating a 16-year-old boy. Boyd resigned and was later acquitted.

“I mean, I’m disgusted. It’s not right for a police officer to be somewhere and have these horrible charges brought against him. And then instead of getting fired, to be allowed to resign and then come work in a different department,” Kidd said.

Just last month, retired librarian Mary Knowlton was shot and killed by Officer Lee Coel during a police role-play demonstration in Punta Gorda, Florida. Although ruled an accident, Coel was already under investigation where he allowed his K-9 to maul a cyclist during a traffic stop in 2015.

Two years before that, Coel was a rookie cop in Miramar, Florida, when he resigned amid allegations of using excessive force during an arrest caught on surveillance tape.

According to Roger Goldman, a law professor with St. Louis University and expert on police licensing, a national database is needed for police departments looking to hire.

“There is tremendous opposition by police unions to have any kind of reform,” Goldman said. “I know of many cases where the chief will agree not to say anything negative in order for that person to resign.”

Both Boyd and the Ferguson police declined our request for an interview. But in a statement to “CBS This Morning,” the department said they’ve “made important revisions” to their hiring practices, including “a psychological examination, investigation of an applicant’s prior work history, consultation with applicant’s previous employers and a criminal background check.”

“What would you like to see happen to Officer Boyd?” Morgan asked.

“I would like to see him fired. I would like that information to follow him everywhere, to where he would not be allowed to be a police officer anymore,” Kidd said.

The Department of Justice told CBS News that plans are underway to launch a nationwide database to track decertified officers. And while this is a major step on the road to police reform, experts say the biggest challenge will be to convince the nation’s estimated 18,000 police departments to participate.

Family of youngest bar massacre victim: "It's not about gun control"