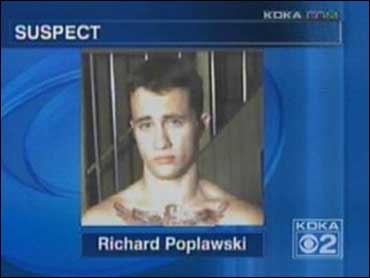 A man opened fire on officers during a domestic disturbance call Saturday morning, killing three of them, a police official said.

Neighbors described how a quiet street in the city's Stanton Heights neighborhood turned into a battlefield with hundreds of rounds cracking through the morning air and fallen police officers lying bleeding in the street, their colleagues unable to reach them.

Police Chief Nate Harper says the motive for Saturday's shooting isn't clear. Friends say the gunman recently had been upset about losing his job and that he feared the Obama administration was poised to ban guns.

The three dead officers are Eric Kelly, Stephen Mayhle and Paul Sciullo III. Kelly had been on the force for 14 years and the other two only two years each. Another officer was shot in the hand and a fifth broke his leg on a fence.

The gunman, 23-year-old Richard Poplawski, was arrested after a four-hour standoff.

The shooting occurred just two weeks after four police officers were fatally shot March 21 in Oakland, Calif., in the deadliest day for U.S. law enforcement since Sept. 11, 2001. The officers were the first Pittsburgh city officers to die in the line of duty in 18 years.

It also came less than day after a gunman went on a rampage at an immigrant center in Binghamton, N.Y., killing 14 people including himself.

Neighbors said the shooting began at about 7 a.m. and that two officers were shot almost immediately.

"When I looked down I saw two police officers laying in the street," said Don Sand, who lives across the street and was awoken by the sound of gunfire.

Gail Moschetti, who lives diagonally across the street from the Poplawski house, said she heard hundreds of shots as she and her husband took refuge in their basement. Tom Moffitt, 51, a city firefighter who lives two blocks away, said he came to the scene and heard "hundreds, just hundreds of shots."

Below, Pittsburgh Police Chief Nate Harper talks about the shooting.

Local Video from KDKA in Pittsburgh

Edward Perkovic said Poplawski, his best friend, feared "the Obama gun ban that's on the way" and "didn't like our rights being infringed upon." Another longtime friend, Aaron Vire, said Poplawski feared that President Barack Obama was going to take away his rights, though he said he "wasn't violently against Obama."

Perkovic, 22, said he got a call at work from him in which he said, "Eddie, I am going to die today. ... Tell your family I love them and I love you."

Perkovic said: "I heard gunshots and he hung up. ... He sounded like he was in pain, like he got shot."

Vire, 23, said Poplawski once had an Internet talk show but that it wasn't successful. Vire said Poplawski had an AK-47 rifle and several powerful handguns, including a .357 Magnum.

Another friend, Joe DiMarco, said Poplawski had been laid off from his job at a glass factory earlier this year. DiMarco said he didn't know the name of the company, but knew his friend had been upset about losing his job.

The last Pittsburgh police officers killed in the line of duty were Officers Thomas L. Herron and Joseph J. Grill, according to a Web site that tracks police killings. They died after their patrol car collided with another vehicle while chasing a stolen car on March 6, 1991.

According to the National Law Enforcement Officers Memorial Fund, 133 law enforcement officers died in the line of duty in 2008, a 27 percent decrease from year before and the lowest annual total since 1960.

Poplawski had often fought with neighbors and had even gotten into fistfights with a couple, Sand said.

"This is a relatively really quiet neighborhood except for him," Sand said. "He was just one of those kids that we knew to stay clear from."

Rob Gift, 45, who lives a block away, said the well-kept single-family houses with manicured lawns are home to many police officers, firefighters, paramedics and other city workers.

"County police and crime lab staff have been working throughout the day with the city police, and we will continue to provide support and assistance as long as needed," Onorato wrote.

Live Updates: Hurricane Ian has South Carolina in its sights