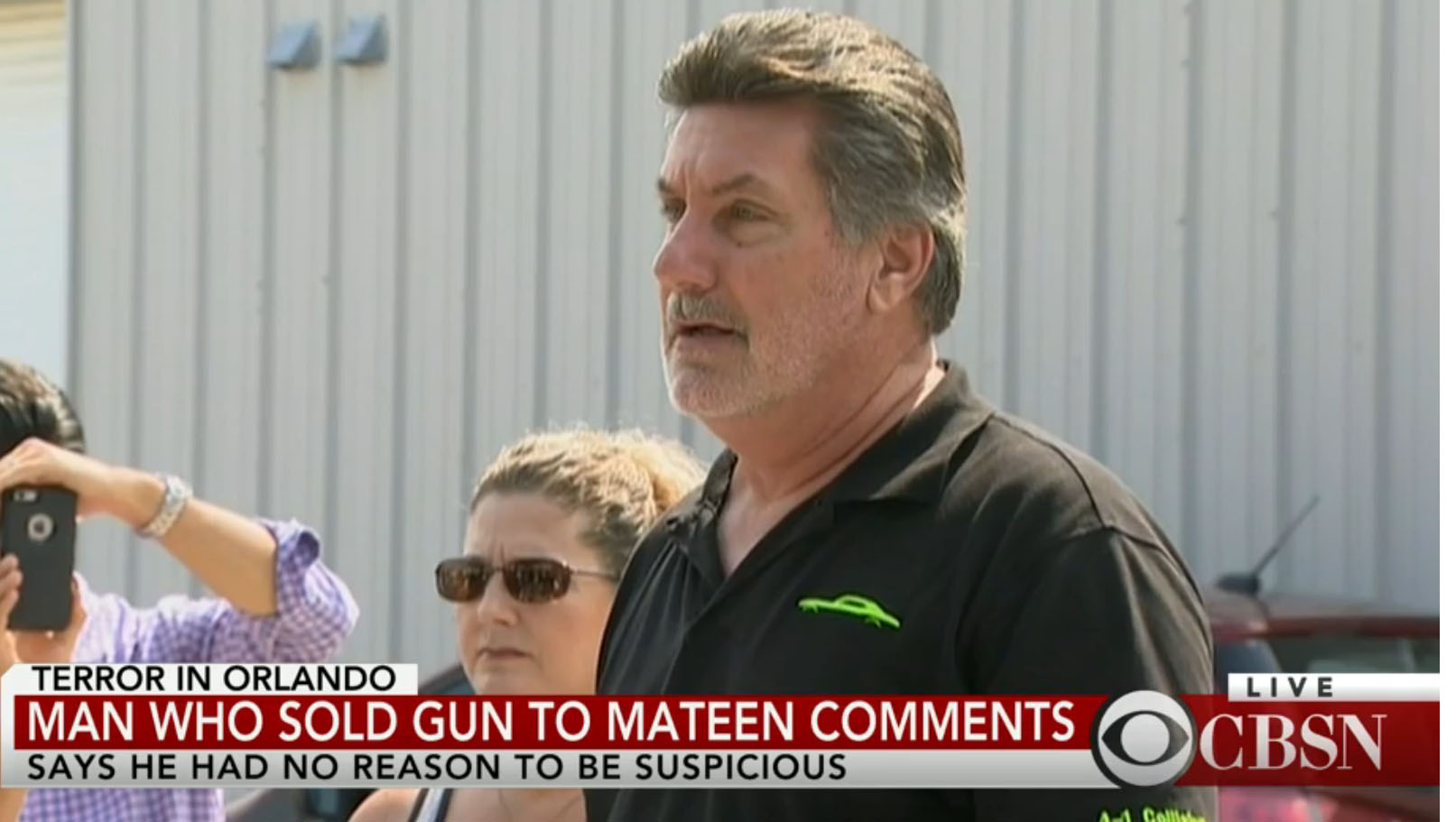 He called the gunman "evil."

The massacre at Florida gay nightclub Pulse early Sunday left 49 dead and more than 50 wounded. The gunman was also killed after a gunbattle with police.

"If he hadn't purchased them from us, I'm sure he would have gotten them from another local gun store in the area," Henson said.

CBS News senior investigative producer Pat Milton reports during the assault, Mateen, 29, was armed with a Sig Sauer MCX rifle, purchased on June 4, and a a Glock 17 handgun, purchased on June 5. The weapons were purchased legally, according to the ATF. Authorities have also said a .38 caliber weapon was found in his vehicle.

"I'm sorry he picked my place," Henson said. "I wish he picked no place."

Henson said the gunman was familiar to him "vaguely." His shop doesn't sell body armor, Henson said, countering media reports that Mateen had sought to buy body armor there.

"I have no recollection of anyone asking for body armor and we've never sold body armor to anyone," Henson said.

Henson said the shop -- located about 120 miles south of Orlando, near Mateen's Port St. Lucie home -- is cooperating with the ATF and other federal investigators.

"We're truly saddened and shocked by this horrific terrorist act," Henson said. "Our heartfelt condolences and prayers are with the families and the victims."

MCX rifles are legal to purchase and possess in Florida -- as long as they are in semi-automatic mode -- without a waiting period, security analyst and former ATF special agent Matthew Horace told Crimesider. The purchaser must pass a background check.

The assault-style rifle fires one round per trigger pull, but is capable of firing hundreds of rounds within minutes, Horace said.

Mateen had a concealed carry permit from the state of Florida, Milton reported. According to the Associated Press, Mateen had a firearms license since at least 2011, and it was set to expire in 2017. He had worked as a security guard and also passed his employer's background checks.

Florida is generally considered to be a state with minimal restrictions on firearms purchases, Horace said. There are flags on persons prohibited from buying firearms in Florida, however, including convicted felons, according to an ATF spokesman. Mateen had no criminal history, but he had been on federal radar in recent years.

According to FBI Agent Ron Hopper, Mateen first came to the FBI's attention in 2013 when he made inflammatory comments to co-workers alleging possible ties to terrorism. He told co-workers and others he knew the Tsarnaev brothers, a U.S. intelligence source told CBS News.

Hopper says the claims were "thoroughly investigated" and Mateen was interviewed twice. But officials couldn't verify the substance of the comments, and the investigation was closed.

Mateen again surfaced on federal radar in 2014, Hopper said, as someone who may have had ties to a suicide bomber. Mateen was again interviewed, but investigators determined the contact was minimal and didn't constitute a threat.

Mateen was not on a current terror watchlist, a U.S. intelligence source tells CBS News. He was entered into a terrorist screening database during the time the FBI was questioning him, but he was removed when the FBI closed the investigation.

The previous investigations would not have flagged law enforcement that Mateen was attempting to purchase a firearm, FBI director James Comey said at a press conference Monday.

"The way the system is currently organized, once someone, once an investigation has been closed, there is no notification of any sort that is triggered by that person later attempting to purchase a firearm," Comey said.