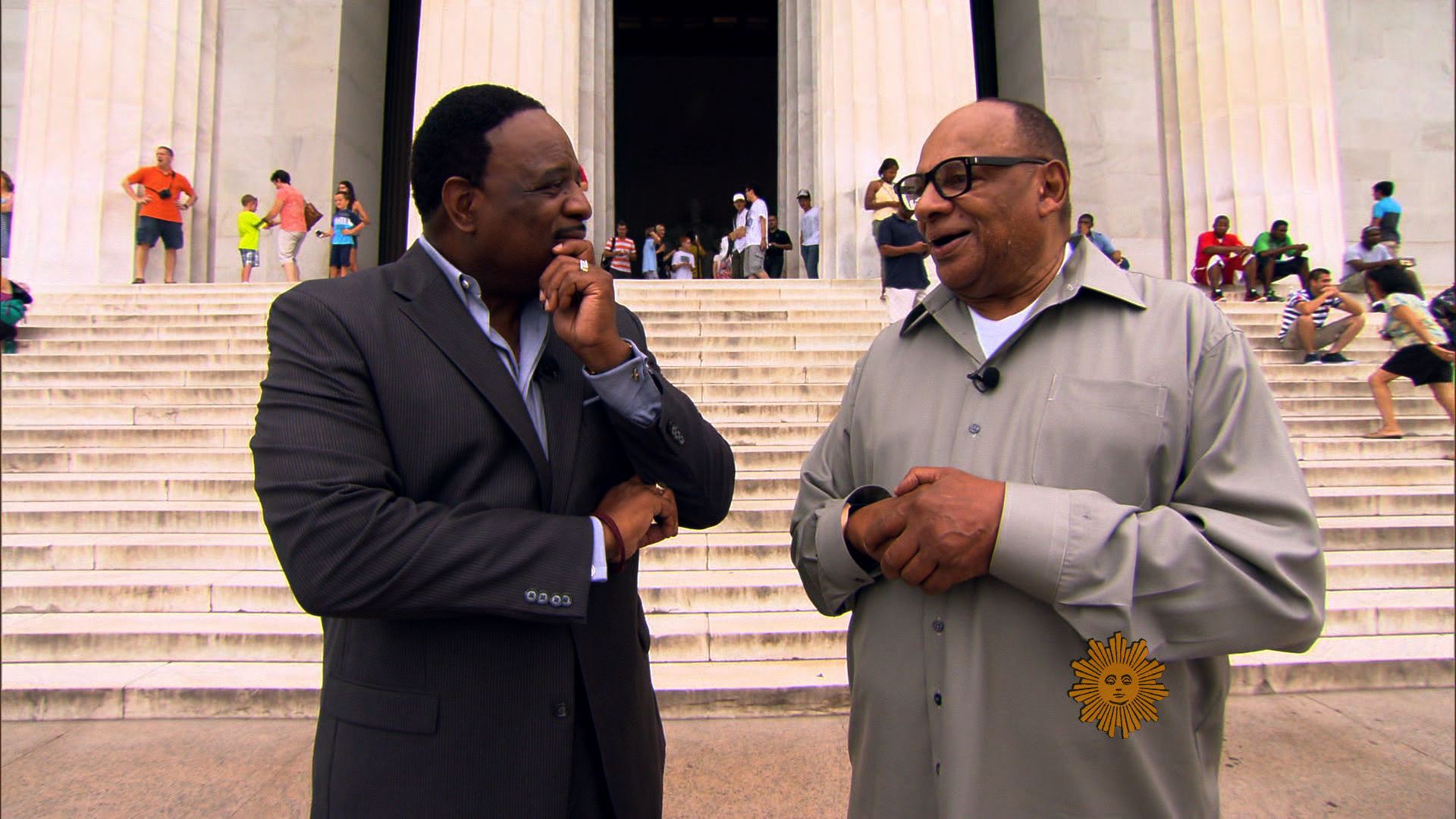 (CBS News) On August 28, Americans will celebrate the 50th anniversary of the March on Washington for Jobs and Freedom. The highlight of that day in 1963 was Dr. Martin Luther King's "I have a dream" speech. CBS News special correspondent James Brown has the story of a man who not only witnessed history but walked away with a piece of it as well:

Fifty years ago, George Raveling was a 26-year-old former college basketball star who was not only one of a quarter-million people to witness Martin Luther King's historic "I Have a Dream" speech - as a last-minute volunteer, he had a coveted spot near the podium.

"It took place right here in this designated spot," he recalled. "As I look back now I can feel a little nervousness inside my body, a little tremor, because I certainly view it a lot differently than I did then."

"I was to the left of Dr. King," Raveling told Brown. "I would suggest probably seven or eight security people away."

Just having a front-row seat to such a momentous occasion is a memory worth talking about, but George Raveling's story really begins with what happened after the speech.

"So with the place going berserk, what did you do when he finished?" Brown asked.

"I walked over, and he was just foldin' ... the paper. And I said, 'Dr. King, can I have that copy of the speech?'" Raveling replied. "... and he - he turned and handed it to me. Just as he did, a rabbi on the other side came up to congratulate him, and it was over. And - and it happened that quick."

That's right, George Raveling was handed one of the greatest speeches in American history by Martin Luther King Jr., himself. It all happened by chance -- the result of a dinner conversation at the home of a friend a few days before the march.

"At that time my best friend was a young man named Warren Wilson, and his dad was a very prominent dentist in Wilmington, Del.," Raveling explained. "And so I was down visiting them, and ... And so when dinner was done, we went into the family room to watch the evening news, and the news was primarily dominated with this forthcoming march on Washington."

"And so when the news ended," Raveling continued, "Dr. Wilson asked us if we were going to go, and we said 'no'. He said, 'I think it's really important that you go down and be part of this movement.' "

So Raveling and Wilson made the trip to Washington, D.C., the night before the march.

Raveling recalled, "We got down to the monument grounds, and we parked, and we're walking around, and we ran into a gentleman. And he asked us if we were coming to the march, and we said 'yes'. And he said, 'Would you be interested in volunteering?'"

They said yes, and showed up early the next day, they were assigned to handle security around the podium, where celebrities like Marian Anderson and Sammy Davis Jr. would stand.

"We knew it was important, but we didn't know that it was historic," said Raveling.

Tens of thousands descended on the Mall . . . black and white, rich and famous, working and middle class.

"When you looked out here, all you could see was a mass of humanity. Reflective pool, you couldn't even see the grass," he said.

Beginning at 9 a.m., a steady stream of speakers and singers took to the podium. Finally, by late afternoon, the last speaker was announced: Dr. Martin Luther King Jr.

King: "I have a dream that my four little children will one day live in a nation where they will not be judged by the color of their skin but by the content of their character -- I have a dream today."

The words Dr. King spoke that day signaled a turning point in American history, but as for the three pages they were written on, Raveling simply tucked them away in an autobiography of Harry Truman and forgot about it.

Raveling embarked on a successful career as a basketball coach that took him to Washington State, the University of Iowa and USC.

"For over 20 years I never looked at the speech again," Raveling said, "Until I got to the University of Iowa as head basketball coach, I never once went back and reviewed the speech again. But it hadn't taken on the historical significance that it had now, or I certainly would have gone back and make sure I still had it, and put it in a safe place."

Then, one day in 1984, a local newspaper reporter named Bob Denney interviewed Raveling about the significance of being the first African-American coach at Iowa.

"He said to me, 'Were you ever invited - involved in the civil rights movement?' And I said, 'Well, kinda.' And he said, 'Well, what do you mean?' And so I told him the story, and he said, 'You have the speech?'

And I said, 'Yeah.' And even at that point, it still didn't dawn on me there was anything unusual about it. And so he got all excited, he said, 'Well, where is it?' "

The speech right where he left it -- tucked in the Truman book inside a box in his basement. After the article was published, with a picture of Raveling standing next to King, the reporter framed the speech for Raveling as a gift.

"So coach, this is where you actually brought this speech back for us, huh?" asked Brown.

"Yeah, I brought it back to the house ... for us to do this interview," Raveling replied.

The typed document has been in that frame for the last 30 years. Its new home is in a bank vault.

Each page is folded in the middle, reflective of Raveling having folded it to fit into the book. "Yeah, for 20 years!" he laughed. "And you can see a little discoloration down there."

The speech looks none the worse for the wear. But the irony of the document is that the words "I have a dream" are nowhere to be found.

"It doesn't have a title ... It's not identified as 'I have a dream." You can simply see the date and the time. You'll see that he pretty much followed the script," said Raveling.

"I noticed there's an asterisk here on the copy of the speech," Brown pointed out.

"Right here is where we - we now go into the ad-libbed part of the "I have a dream" speech," said Raveling.

It's true: those famous words were ad-libbed, turning a planned four-minute speech into a 16-minute historic address.

Raveling says he would be happy to turn the speech over to a museum, but he hasn't found the right match.

"There was time when I was contacted by someone who said they represented the King family, and that they wanted to put it on exhibit. And I was willing to do that, as long as they would sign an agreement that the speech belonged to me," said Raveling. "And we weren't able to work that out."

At age 76, Raveling considers himself the guardian of the speech. He has arranged for his son to inherit the document upon his death, with the condition that it is never to be sold.

"Even though you've been offered as much as $3.5 million for that speech, you won't sell it?" Brown asked.

"Nope," he replied, "because I would like to think somewhere out there, my mom and dad and my grandma taught me better than that. And everything in life you can't equate in money."

Note: Coach Raveling will be honored with a lifetime achievement award from the Naismith Memorial Basketball Hall of Fame in September.

Editor's Note: George Raveling tells CBS News he made an asterisk and underlining notations on the speech document in order to point to the ad-lib section of the speech. The notation is in the general area, but not the exact spot, in which Martin Luther King Jr. diverted from the script.