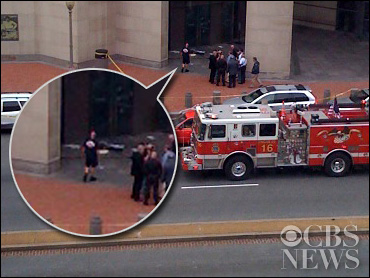 An 88-year-old gunman with a violent and virulently anti-Semitic past opened fire with a rifle inside the crowded U.S. Holocaust Memorial Museum on Wednesday, fatally wounding a security guard before being shot himself by other officers, authorities said.

The assailant was hospitalized in critical condition, leaving behind a sprawling investigation by federal and local law enforcement and expressions of shock from the Israeli government and a prominent Muslim organization.

Law enforcement officials said James W. von Brunn, a white supremacist, was under investigation in the shooting and that his car was found near the museum and tested for explosives. The weapon was a .22-caliber rifle, they added. They spoke on condition of anonymity, saying they were not authorized to discuss the investigation just beginning.

The slain guard was Stephen Tyrone Johns, 39, of Temple Hills, Md. CBS News has learned. He was married and had worked at the museum for six years.

"Officer Stephen Tyrone Johns died heroically in the line of duty today," the museum's chairman, vice-chairman, and director said in a statement. "There are no words to express our grief and shock over these events. ... Our thoughts and prayers go out to Officer Johns' family."

Johns "greeted us every day with a wonderful smile on this face," Holocaust Museum Director Sara Bloomfield said at an evening press conference.

The museum will be closed tomorrow in Johns' memory, and its flags will be flown at half-mast, the statement said. President Barack Obama also offered his condolences to Johns' family in a statement released late Wednesday.

He added, "This outrageous act reminds us that we must remain vigilant against anti-Semitism and prejudice in all its forms. No American institution is more important to this effort than the Holocaust Museum, and no act of violence will diminish our determination to honor those who were lost by building a more peaceful and tolerant world."

Washington, D.C. Police Chief Kathy Lanier said the gunman appeared to have acted alone. He was "engaged by security guards immediately after entering the door" with a rifle, she said, but "the second he stepped into the building he began firing." The suspect reportedly did not attempt to conceal his weapon and began shooting before reaching the museum's metal detectors.

Eyewitnesses tell CBS News that at some point, the activity spilled outside through the front door of the museum. The man described as the shooter can be seen on the ground in images captured from a cell phone across the street.

The museum is "a very safe place to visit," Bloomfield said, adding that its security officers "did exactly as they are trained" today.

The museum does get occasional threats but nothing significant or recent stands out, its security director, Joseph Rosboschil said at the press conference.

Attorney General Eric Holder and members of Congress had been scheduled to attend the world premiere of a play, "Anne and Emmett," Wednesday night. The performance has been cancelled in the wake of the shooting.

The New York Times describes the play as "a fictional dialogue between Anne Frank, whose diary recounted her days in hiding during the Holocaust, and Emmett Till, a black teenager killed by white racists in 1955."

According to a relative, von Brunn attended Washington University in St. Louis and is an artist.

He was commissioned as a naval officer decades ago, and discharged from the Navy in 1956. A cousin, Virginia Gerker of St. Louis, said in an interview she hadn't seen him in 50 years. She said her family had "disowned" him believed him to be mentally ill.

About a dozen years ago, he applied to have his art shown at a gallery in Easton, Md., according to two of the owners. Laura Era and Jennifer Wharton said they rejected his work and he stomped out.

Von Brunn gained infamy in December 1981, after an attempt to kidnap members of the Federal Reserve, including then-Federal Reserve Chairman Paul Volcker - the current chair of President Obama's Economic Recovery Advisory Board, reports CBS News' Stephanie Condon. He was arrested at the Federal Reserve on Dec. 7, 1981, with a revolver, a hunting knife and a sawed-off shotgun on his person, according to reports.

Von Brunn was sentenced in 1983 to 11 years in prison after being convicted by a jury and judge to whom von Brunn referred on his Web site with racial epithets. He served six and a half years in prison, and most of his sentence was carried out at the Ray Brook, New York Federal Correctional Institution, Condon reports.

After his arrest, he wrote a letter to then-Navy Secretary Jim Webb (now a Democratic senator from Virginia) to create interest in his case, referring to himself as a "political prisoner."

One of his writings advertised on the site was described as a "hard-hitting expose" Tncovering a Jewish conspiracy to "destroy the White gene pool."

The book, published in 2002, included a chapter on "The Holocaust Hoax."

In a statement from Israel's government, Information and Diaspora Minister Yuli Edelstein said the shooting was "further proof that anti-Semitism and Holocaust denial have not passed from the world."

And the Council on American-Islamic Relations, a prominent American Muslim organization, said in a statement, "We condemn this apparent bias-motivated attack and stand with the Jewish community and with Americans of all faiths in repudiating the kind of hatred and intolerance that can lead to such disturbing incidents."

Within minutes after the attack, federal agents were dispatched to von Brunn's home in Annapolis, Md., to check his computer. Joseph Persichini, assistant director in charge of the Washington FBI field office, said the shootings were being investigated as a possible hate crime or a case of domestic terrorism.

The Rev. David Ostendorf, executive director of Center for a New Community in Chicago, a national civil rights group, said von Brunn has described in his own writings a long relationship with Willis Carto, founder of the Liberty Lobby, the Spotlight Newspaper and a well-known white supremacist and anti-Semite.

Von Brunn moved around in white supremacist circles, living for a while in Hayden, Ida., the same community that was home to the founder of the Aryan Nation, reports CBS News correspondent Bob Orr.

The Holocaust Museum shootings came 11 days after another hate crime, the murder of Kansas abortion doctor George Tiller. The suspect in that shooting, Scott Roeder, is described as an anti-abortion rights radical.

The violence underscores a troubling trend. In the past eight years, the number hate groups in America has exploded - up 50 percent from 602 in 2000 to 926 last year, Orr reports.

President Barack Obama was saddened by the shooting, which took place near the White House and is concerned about a guard who appears to have been injured, White House Press Secretary Robert Gibbs said.

The museum normally has a heavy security presence with guards positioned both inside and outside the museum. All visitors are required to pass through metal detectors at the entrance, and bags are screened.

The museum, located just off the National Mall near the Washington Monument, is a popular tourist attraction. It draws about 1.7 million visitors each year. Today's was the first violent incident at the museum since it opened 16 years ago, Attkisson reports.