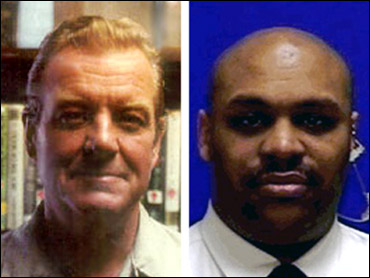 The man who is suspected to have opened fire this afternoon at the Holocaust Museum in Washington is a white supremacist and a convicted criminal who served time for an attempted kidnapping of federal officials.

James Wenneker von Brunn, 88, gained infamy in December 1981, after an attempt to kidnap members of the Federal Reserve, including then-Federal Reserve Chairman Paul Volcker - the current chair of President Obama's Economic Recovery Advisory Board. Von Brunn was arrested at the Federal Reserve on Dec. 7, 1981, with a revolver, a hunting knife and a sawed-off shotgun on his person, according to reports.

Postings on his own Web site - which is filled with racially-motivated hate speech - reveal von Brunn's grievances with the government that motivated his attempted kidnapping.

"I intended to bind their hands, and persuade them to appear on Television," von Brunn wrote on his site, www.holywesternempire.org. "There, on camera, I intended to read to the American public my indictment of these treasonous liars. If I survived I expected to be arrested, then stand trial before a jury of my peers."

According to reports at the time of conviction, von Brunn told police he wanted to take Federal Reserve Board members hostage to focus media attention on the board's responsibility for high interest rates and the nation's economic turbulence.

Von Brunn was sentenced in 1983 to 11 years in prison after being convicted by a jury and judge to whom von Brunn referred on his Web site with racial epithets. He served six and a half years in prison, and most of his sentence was carried out at the Ray Brook, New York Federal Correctional Institution.

After his arrest, he wrote a letter to then-Navy Secretary Jim Webb (now a Democratic Senator from Virginia) to create interest in his case, referring to himself as a "political prisoner."

According to the autobiography on his Web site, von Brunn served on a PT boat during the Second World War and was based on Corsica, an island off the southeast coast of France. He wrote of recovering a Nazi flag from an enemy boat and keeping it until it was "destroyed" after his "house was torched in 1977."

In 2002, von Brunn published on his Web site a book that detailed anti-Semitic conspiracy theories, with chapters such as "the Holocaust Hoax" and "the Negro." The book was mostly anti-Semitic but also attacked all non-white ethnicities.

"We are witnessing today on the world stage a tragedy of enormous proportions: the calculated destruction of the White Race," he wrote.

He threatened to take action against minority races, writing "we will offer a plan to remove the cancer from our cultural organism."

Von Brunn moved to New York City after World War II, and by his own account served as an advertising executive and film producer for 20 years. He claimed to be a member of Mensa, the high-IQ society.