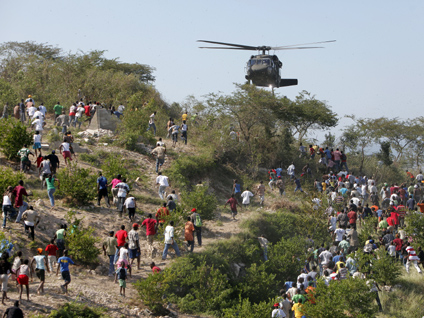 The government has allowed 283 species identified as possibly facing extinction to languish without protection under the Endangered Species Act, a coalition of environmental groups contends in a lawsuit against the Interior Department.

Some 24 candidate species have gone extinct waiting for protections in the past 32 years, the Center for Biological Diversity in Arizona, Forest Guardians in New Mexico and other advocacy groups allege in the suit filed late Monday in U.S. District Court here.

Noah Greenwald, a conservation biologist with the Arizona-based group, said the Interior Department hasn't acted as quickly as the law requires in adding wildlife to its endangered species list.

The species, ranging from the Dakota skipper butterfly in the northern Great Plains to the Oregon spotted frog, have waited an average of 17 years to be added to the list, the suit says.

"The Endangered Species Act is an effective tool for saving wildlife, and those 283 species need those protections," Greenwald said.

Interior Department officials said Tuesday they had not reviewed the groups' complaint and couldn't comment.

The jellyfish's sting: Pain - and then some

Craig Manson, assistant Interior secretary for wildlife, has previously said the law itself is "broken" from similar suits because the Fish and Wildlife Service has to spend too much of its resources defending itself in court rather than serving the best interests of wildlife.