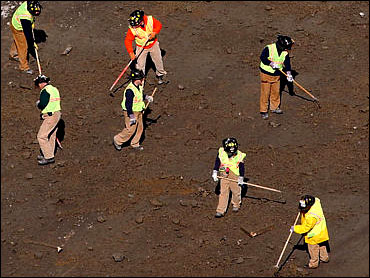 A May 30 ceremony will mark the end of the cleanup and recovery work at the World Trade Center site, as the last heap of Sept. 11 debris is removed, Mayor Michael Bloomberg said on Thursday.

The excavation will be completed three months ahead of what city officials had predicted, and will have cost about $750 million — about one-tenth of the initial estimate of $7 billion.

However, "the recovery effort will not finish on May 30th," Bloomberg said. "There will be pockets of debris that we will uncover and want to sift through."

The backbreaking work began as a hand and bucket search for survivors in the hours after hijacked jetliners were slammed into the center's twin towers, leading to their eventual destruction. It has continued nonstop for more than eight months.

The last survivor was rescued from the smoking, 10-story rubble pile on Sept. 12. As days turned to weeks, the work shifted to the recovery of human remains.

City officials hired four contractors to manage the thousands of workers and the debris removal. In late September, bucket brigades were replaced by heavy equipment.

The mild winter allowed the work to continue without interruption.

By late December, the remains of the damaged buildings in the trade center complex had been removed, and the 15-block operation began to resemble a construction site.

Laborers also dismantled the last standing remnant of the north tower. The ragged latticework of vertical columns had become a symbolic motif for the attack, and may be incorporated in a memorial to the more than 2,800 victims.

The May 30 ceremony — expected to draw thousands of victims' relatives and rescue workers — is to take place in the footprint of the twin skyscrapers, now a seven-story crater.

"It will start with the ringing of the fire department signal for fire officer lost in the line of duty, that is, five bells repeated four times," said Bloomberg. "They will carry out one empty flag-draped stretcher to symbolize those who we never did recover.

"This is a symbolic end of the process, and a way to say thank you to those that have worked so hard and taken such risks."