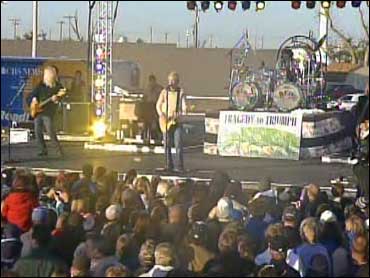 Sunday is the one-year anniversary of the tornado that almost made tiny Greensburg, Kan. a thing of the past -- but the townsfolk don't look at it with despair. Rather, they view it as a sign of how far they've come in their efforts to reconstruct their structures -- and their lives -- a rebuilding effort with the equivalent in human determination and perseverance of the power and fury the twister brought.

And in remaking itself, Greensburg is going green -- hoping to become the greenest town in the nation.

Early Show co-anchor Maggie Rodriguez did a report on the plight of some in Greensburg who were ripped off by contractors rebuilding their homes, and home improvement expert Danny Lipford offered tips on finding honest, competent contractors.

And co-anchor Harry Smith chatted with Greensburg middle school teacher Josh Dellenbach, who taught his students a lesson they won't soon forget: After a year of receiving donations from all over the country, Greensburg residents were more than touched. Dellenbach encouraged his students to give back, and they decided to raise money for Macon County, Tenn., which was devastated by a tornado in February. Thirty-eight students put together a coin drive. Dellenbach said he'd match whatever they collected. And he's going to have to come up with a pretty penny -- they took in more than $5,500 in their efforts to "Pay It Forward."

The money was sent, among other places, to the Macon County Tornado Relief Fund, a foundation set up by a few of the area's banks to help the many victims of the February twister.

Sharon Day, an employee of one of the banks that set up the relief fund, received an encouraging letter and the donation from Greensburg a week ago. She didn't know who the donation was from, and decided to wait until Monday to investigate. While getting ready for work Monday morning, Day was listening to The Early Show and heard, "live from Greensburg, Kansas," and stopped dead in her tracks. After watching some of the show's segments, she realized Greensburg had suffered a fate similar to her area, and that Greensburg students had given of themselves to help another town that had suffered as Greensburg had.

Very touched, Day called Greensburg and was connected with Dellenbach. The two exchanged stories and tearful thanks and, on the show Friday, Day and Dellenbach met:

And Day had a surprise of her own for Dellenbach -- several computers from Macon-area companies for Greensburg schools.

Meaning Of One-Year Anniversary Comes Through In Ceremony