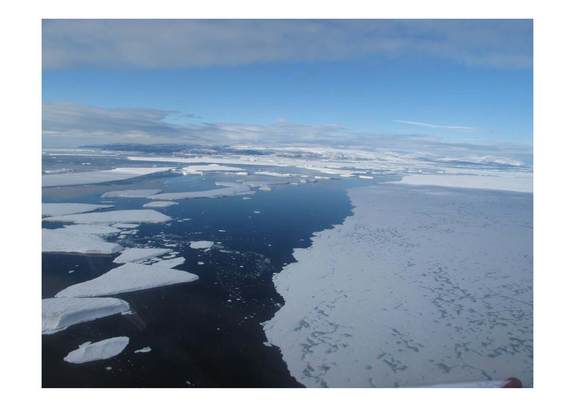 Greenland is losing the battle against rising air and ocean temperatures, a new study finds. The last bulwark to fall is the northeast corner of the Greenland Ice Sheet, which started shrinking rapidly in 2003, according to a new study.

"My guess is this is a new record for Greenland," said lead study author Shfaqat Abbas Khan, a climate scientist at the National Space Institute at the Technical University of Denmark. "This was very surprising, because we don't expect huge ice loss in northeast Greenland."

Khan and his co-authors found that northeast Greenland's Zachariae glacier retreated 12.4 miles (20 kilometers) in the last decade. For comparison, southwest Greenland's Jakobshavn glacier has retreated 21.7 miles (35 km) in the past 150 years, the researchers said. Jakobshavn is the fastest-flowing glacier on Earth.

"Suddenly we have a new area which will most likely be faster than Jakobshavn in the future," Khan told Live Science.

The shocking results have already sparked debate among Greenland experts, because the ice loss estimates for the northeast are much greater than other recent studies. "Nobody else has really seen this big dynamic [ice loss] signal they're seeing," said Ian Joughin, a glaciologist at the University of Washington's Polar Science Center, who was not involved in the study.

For example, a recent study that estimated ice loss at 178 Greenland glaciers calculated that Zachariae glacier, one of northeast Greenland's three main glaciers, only lost a total of 20 billion tons of ice between 2000 and 2012. Just four glaciers accounted for half of Greenland's melting ice since 2000, and none were in the northwest, the study said. The findings were published Feb. 7 in the journal Geophysical Research Letters.

"Overall, I would say that this area is likely to lose mass in the future but that there is not a catastrophic retreat going on," Joughin told Live Science.

One reason why big discrepancies can arise between similar studies is that data is sparse in northeast Greenland. Researchers estimate ice loss with computer models based on ice thickness, glacier valley shape and ice velocity. In the remote northeast, just a few flight lines from research programs such as NASA's IceBridge cross some critical glaciers.

When ice sheets or glaciers melt, the newly exposed ground rises, because it is free of its heavy burden. GPS monitoring reveals that the land in northeast Greenland started to spring up in 2003, Khan and his colleagues discovered. Before then, the land was relatively stable.

There have been other hints of ice melting in northeast Greenland. In the last decade, observers have noted new icebergs and giant cracks in glaciers here.

Unusually warm air temperatures in 2002 through 2004 triggered the ice loss in northeast Greenland, Khan said. The warm air meant there was less sea ice where glaciers like Zachariae enter the ocean. Sea ice acts like a dam, holding back flowing glaciers. The missing ice meant the northeastern glaciers could accelerate towards the sea, dropping more icebergs to boot. Since 2004, temperatures have gotten colder but the glaciers continue their rapid pace toward the sea, the researchers found. [10 Surprising Results of Global Warming].

Researchers do agree that Greenland's ice loss has doubled in the last decade, closing in on 400 billion tons per year. More ice is melting than is being replaced by snow.

However, there is disagreement on what the ice loss in Greenland means for future sea level rise. Some models show that many of Greenland's glaciers will eventually slow or even halt their retreat as they shrink back toward choke points in their rocky valleys.

The current consensus is that sea level could rise by 11 inches to 38 inches (28 to 98 centimeters) by 2100, according to the latest IPCC report. One of the biggest questions in this estimate is how fast the ice sheets will melt.

And until now, researchers thought northeast Greenland's glaciers weren't kicking in to the increase in melting. "This suggests that Greenland's contribution to global sea level rise may be even higher in the future," Bevis said.

But Joughin thinks the numbers don't add up. "I'm not sure how they arrive at these high thinning rates," he said. "I just don't agree with the numbers they're coming up with."

Expect the debate to advance soon, because other scientists have new results from northeast Greenland that should be published later this year. "This paper highlights that while we know a lot about Greenland, there is work to do to really nail down the numbers," said Richard Alley, a glaciologist at Penn State University, who was not involved in the study but is currently working on northeast Greenland research.