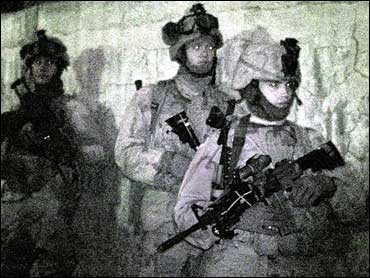 A mortar attack killed four employees of a British security firm and wounded 15 others in Baghdad's Green Zone, a fortified area that houses the U.S. and Iraqi leadership, the company and British officials said Friday.

"The mortar landed in their camp," said a Foreign Office official on condition of anonymity.

Tim J. O'Brien, spokesman for the London-based Global Risk Strategies, said the attack took place Thursday, when multiple explosions were heard and black smoke was seen rising from the fortified zone on the western bank of the Tigris River.

"There was an incident yesterday. We lost four people and had 12 to 15 who were injured," he said. "We can't confirm what this incident actually was until we go through internal investigations."

O'Brien declined to provide the identities of the victims, but said that none of those killed were American.

Global Risk Strategies is a London-based firm that provides security in countries including Iraq and Afghanistan.

Meanwhile, U.S. forces found 13 more bodies in and around the northern city of Mosul, the military said Friday, bringing to 35 the number of corpses discovered in the past week in the area shaken by an insurgent uprising.

"It's a continued campaign of threats, intimidation and murder by insurgents to spread fear into the public. Their campaign has been directed at what appears to be Iraqi security forces," said Lt. Col. Paul Hastings, a spokesman with Task Force Olympia.

U.S. forces patrolling Mosul and nearby Tal Afar on Thursday morning found nine bodies on the western side of Mosul, he said. Two more bodies were found in the city later in the day.

In Tal Afar, one Iraqi National Guard soldier was found dead while a second body discovered in a different location was unidentified.

The military late Thursday had reported the discovery of another two bullet-riddled bodies in western Mosul. U.S. and Iraqi troops were hit by mortars, rocket-propelled grenades and small arms fire as they were retrieving the bodies, according to Lt. Col. Eric Kurilla of the Army's 1st Battalion, 24th Infantry Regiment.

The U.S. military spotted at least one team of insurgents firing at them. One Iraqi National Guardsman suffered minor injuries, according to Kurilla.

Mosul, Iraq's third-largest city, was the site of a mass insurgent uprising in apparent support of Fallujah guerrillas following the U.S.-led assault on that rebel stronghold on Nov. 8. In the wake of the mass attacks, U.S. and Iraqi forces were sent in to retake parts of the city but insurgents have managed to hit back.

Twenty other bodies have been found in Mosul since last Thursday. At least 10 of the bodies - nine of them shot execution-style - belonged to the Iraqi regular army, based at the al-Kisik military base about 31 miles west of Mosul, near Tal Afar. Four of the bodies found were decapitated.

In Fallujah, insurgents ambushed U.S. troops as they entered a home during house-to-house searches in the former rebel bastion, killing two Marines and wounding three others, the U.S. military said Friday.

U.S. troops have continued clearing operations in Fallujah, which came under a massive week-long U.S.-led assault that began Nov. 8. Sattler said about 50 percent of the houses in the city have already been cleared.

A weapons cache, described by the U.S. military as the largest uncovered so far in Fallujah, was discovered Wednesday in the Saad Bin Abi Waqas Mosque, where fugitive rebel leader Abdullah al-Janabi often preached.

U.S. forces also uncovered what may have been a mobile bomb-making factory as well as mortars, rocket-propelled grenades, launchers, and parts of surface-to-air weapons systems elsewhere in the mosque compound, the military added.

"We also found in the laboratory manuals and instructions spelling out procedures for making explosives," he said. "They also spoke about making anthrax."

Dawoud showed pictures of a shelf containing what he said were various chemicals - about two dozen glass and plastic bottles as well as plastic sacks full of some powdered substance labeled in Arabic potassium cyanide. One of the pictures showed a line of plastic-covered computer terminals and chairs in a row.

Dawoud also said a key aide of al Qaeda-linked terror boss Abu Musab al-Zarqawi, who was believed to have been based in Fallujah, had been arrested in Mosul, where insurgents rose up this month in support of the Fallujah fighters.

Dawoud identified him only as Abu Saeed and did not say whether he had fled Fallujah. The Iraqi official said the death toll for the entire Fallujah operation stood at more than 2,085, although he gave no breakdown. About 54 U.S. troops were among those killed.

Also Friday, Navy Secretary Gordon R. England warned of more violence in Iraq ahead of the country's nationwide elections but said that U.S. and Iraqi forces will prevail in securing the vote.

"There will be efforts to disrupt the elections," England said on a visit to Marines at a camp outside Fallujah. "The insurgents don't want the elections to be held and certainly not that they be successful. But we will prevail. We will provide the necessary stability."