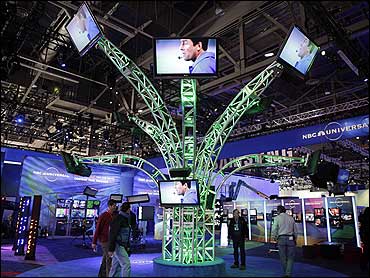 Green technology is out to slay "phantom power."

Digital technology that stops electronics like computers, printers and cellphones from using power even when they're turned off or finished charging, but are still plugged in was among the green products flourishing at the high-tech Consumer Electronics Show.

"For instance, you've taken your cellphone with you to work but you've left the charger plugged in at home - that device is continuing to draw power from the wall," said Green Plug's Seth Socolow.

"It doesn't know that the device has gone away," Socolow said Thursday.

Green Plug's technology will prevent electricity from being wasted, he said.

Green Plug has teamed up with Innergie, developer of small universal power adapters, to use this technology to power all kinds of different electronic devices.

Socolow said he wants consumers to encourage manufacturers of electronics devices to use Green Plug's technology.

In the Consumer Electronic's green tech area, Areaware's Noel Wiggins was showing sustainable products that included wood case radios and simple bicycles, a contrast to sophisticated and high-performing gadgets at the show.

The idea is to have products that are simple and beautiful where there's no desire to upgrade it or wait for the next device to come out.

"You just want to keep it forever and pass it down to your children," he said.

The radios are made by retrained fishermen in Java, Indonesia, from local trees. There also was a folding bicycle and another with solar-powered lights.

"Essentially it powers its lights during the day and at night time they flash," said Wiggins of the New York-based company.

The sun was also featured in the environmentally friendly technology.

A solar-powered knapsack that cost about $160 can charge cellphones and MP3 players. It has three panels that take about a day to charge in the sun that combine to four watts of power, said Sarah Schultz of Solar Wholesale, based near Boulder, Colorado.

"It just converts the energy from the sun into the battery," Schultz said. "You don't even have to think about it at all."

It's popular with teenagers, she added.

"They're out and about they need to call home, eventually, and it's a great way for them to have a backup charger when they're out hiking, or out having some fun outdoors. They don't have to worry about finding that power source to call mom."

It's the second year that CES itself has put an emphasis on minimizing the impact of the show on the environment by improving recycling and calculating its carbon output. Organizers also say last year more than 120 tonnes of solid waste were recycled from the show.

Taiwan's Via said its chips and central processing units are also green and draw less power.

"You can see right now in the industry that people are moving away from more power performance computers to more and more useful ones that require less power from the environment," said Tim Brown, Via's marketing manager.

"As a chip designer, we expect to drop our power consumption for our platform by over 50 per cent over 2009 from just tuning and enhancing our CPU designs and have an increase in the raw performance by about 30 per cent."

Brown said his company has lead-free products, "which is very helpful to the environment when you are trying to dispose of your computer later."

Outside the show, protesters were wearing sandwich boards against television stations in the United States stopping broadcasting on analog airwaves on Feb. 17. They said the move is bad for the environment.

U.S. broadcasters will begin broadcasting only in digital and that means consumers who have rabbit ears or roof-top antennas will have to get set-top boxes and possibly buy new TVs for the change.

"The TVs aren't being recycled and they will go into the landfill," said one protester, saying the sets have lead and mercury that will end up in the water supply.

"These are bad for your health and bad for the environment."