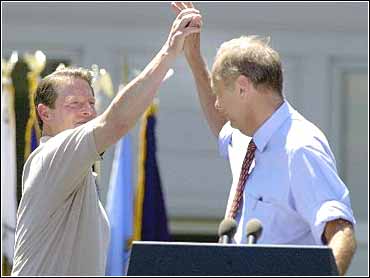 "I endorse Al Gore for president of the United States!" said Bill Bradley. The man who lost an acrimonious Democratic primary fight to Al Gore, then pretty much dropped out of sight for four months, reappeared Thursday in Wisconsin to endorse the vice president in his run for the Oval Office.

The endorsement event on a brightly sunlit outdoor stage in Green Bay was a nice photo-op for Gore, complete with a high-five from the Big Guy and a joint entrance beneath a banner reading "United for Gore." But this campaign show might have been better with the sound off.

Instead of calling Gore the best man for the job, or The Great Leader, Bradley gave three weirdly impersonal rationales for endorsing Gore.

"I believe Democrats have a better chance of guiding America to a brighter future than do Republicans, and it's not even close!" Hmmm.

"I believe that under his (Gore's) leadership, we will come closer to solving problems (like child poverty, access to health care and racial divisions) than under the leadership of George W. Bush, and it's not even close!"

What's "not even close" here is Bradley's passion quotient for Gore's candidacy.

But wait. "There's another reason I endorse Al Gore." Okay, here we go. "More and more of our future will depend on forces and scientific breakthroughsÂ… Gore has a deep understanding of those technological forces changing America Â…"

Whatever this third reason to vote Gore is, it has something to do with "maximizing our future for the greatest number of Americans."

The phlegmatic Bradley made the wooden Al Gore look like the Energizer Bunny. Still, the event was exponentially more successful than the pained first joint appearance of George W. Bush and his vanquished GOP primary challenger John McCain, where the Arizona senator overacted his reluctant bride role and Bush looked like he'd just come from the dentist's chair.

A grateful, gracious and "honored" Gore took the lectern and showed why he's the winner.

"I treasure Bill Bradley's support," Gore said of the man he squashed like a bug in Iowa and New Hampshire. "He is a good Democrat, who speaks and stands for principles we all believe in."

The vice president paid tribute to Bradley's leadership on health care and campaign finance reform, and his efforts to put racial unity on the map as an issue.

Gore quoted the former New Jersey senator several times and promised, "I pledge to translate his plans and his words on child poverty into the deeds of this great nation.">

As he wound up his short speech to the pumped-up Democratic crowd, Gore sounded a little bit like Bradley by saying, "We can use our prosperity for great purposes Â… to lift up every child, to level every barrier, to give help to the helpless and a voice to the voiceless."

Bradley's endorsement comes as Gore launches repeated attacks on Bush's ties to what the vice president calls the "do-nothing-for-the-people" Republican Congress, sounding increasingly populist themes in the weeks before the Democratic National Convention.

The Green Bay huddle accomplishes a "tactical piece of business which is pretty important," said Bill Carrick, a California Democratic strategist who is working with Senator Dianne Feinstein's re-election bid and the Democratic Congressional Campaign Committee (DCCC). "The sooner the vice president consolidates the Democratic base, the sooner he can start focusing on the swing votes who decide the general elections and I think Bradley helps him do that."

But what can Bradley do to help Gore win those uncommitted voters? Political analyst Stuart Rothenberg argued Bradley would make a credible surrogate who could relieve Gore of some of his unflattering attack duties:

"I think there's a limit to how much Gore can remake and repackage himself. I think he's going to have to make a few chinks in Bush's armor. It would help if someone known as an outsider, a reformer, not known as an attack dog, would say, 'Here is why Al Gore's better, and here's why Bush is worse.'"

To really help Gore, Bradley, the new team player, must stay in the game, and play with heart.

"Bradley's going to have to be more outspoken, more outspoken even than he was on his own behalf," said Rothenberg, editor of the nonpartisan Rothenberg Political Report. "The problem is, he didn't even want to do it for his own campaign - why would he do it for Al Gore?"

"If this is a one-shot deal where the frosty, unemotional, cerebral Bill Bradley makes his way to Green Bay like the Dalai Lama or something, then disappears, I don't think that helps at all."

A Bradley spokesman said the former senator will campaign with Gore again, but nothing's scheduled yet.