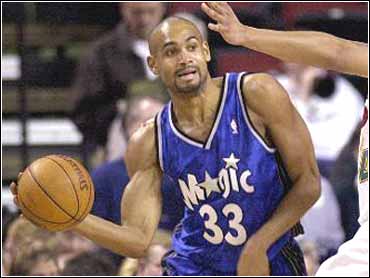 It will take about five months for the five-time All-Star's ankle to heal but there is no immediate timetable for Hill's return to action, said Dr. Joe Billings, the Magic team physician.

Billings assisted in the 90-minute operation at Union Memorial Hospital. Doctors replaced screws and hardware inserted last April after Hill broke the inside bone on his left ankle during the NBA playoffs, while still with Detroit.

A bone graft from Hill's pelvis also was applied to the ankle.

"Grant had a non-union of a fracture as a result of a lack of blood supply to that area," said Dr. Mark Myerson, who performed the surgery. "The prognosis is for a full recovery."

"We are pleased with the outcome of Grant's surgery this morning and anticipate a full recovery and his return to All-Star form next season," Gabriel said.

The 6-foot-8 Hill was acquired by Orlando in August in a sign-and-trade deal with the Pistons for Chucky Atkins and Ben Wallace. Hill's seven-year, $92.88 million contract makes him one of the highest-paid players in the NBA.

Hill and free agent Tracy McGrady were supposed to help the Magic compete for the NBA title this season.

The Magic are 14-17, in fourth place in the Atlantic Division, following a 120-110 loss to New Jersey Tuesday night.

Hill was the third player chosen in the 1994 NBA draft, selected by Detroit from Duke, where he was an All-American. For his career, he has averaged 21.5 points, 7.8 rebounds and 6.3 assists.

Hill started five straight NBA All-Star Games and led the fan voting in 1995 and 1996. In 1997, he won the IBM Award, which measures a player's overall contributions to his team. He shared the NBA Rookie of the Year award in 1995 with Jason Kidd.