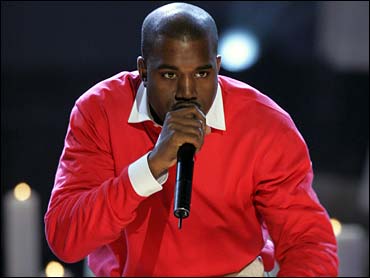 Producer-turned-rapper Kanye West collected a leading 10 Grammy nominations Tuesday, including album of the year, for his innovative debut, "The College Dropout."

West's disc stood out in the rap landscape because of its atypical prose. It avoided the usual plotlines about sex, money and violence and touched on everything from religion to his own insecurities.

The performer, who isn't afraid to sing his own praises after claiming he was "definitely robbed" when he picked up no trophies at the American Music Awards, also had a nomination for best new artist and shared a songwriting bid for song of the year with his hit "Jesus Walks."

"Ten nominations, that's amazing," said West, a nominations presenter at the Music Box Theatre in Hollywood. "That's like a perfect score. I'm at a loss for words."

Evangelical Christian music is flowing into mainstream radio stations -- and changing them. Bob Simon talks to top Christian rock groups Third Day and POD, and rap star Kanye West, on 60 Minutes, Wednesday, Dec. 8, at 8 p.m. ET/PT.
Usher and Alicia Keys, who collaborated on the hit "My Boo," followed West with eight nominations each, including album of the year for Keys' "The Diary of Alicia Keys" and Usher's "Confessions."

Ray Charles, whose posthumous duets album "Genius Loves Company," became the biggest selling album of his long career, had seven nominations including album of the year and record of the year for "Here We Go Again," sung with Norah Jones.

Green Day garnered six bids for its hard-driving rock-punk album "American Idiot" which satirized culture, politics and apathy. The group was nominated for record of the year and best rock song for the title track and best rock album.

Besides Charles' and Jones' "Here We Go Again" and Green Day's "American Idiot," other record of the year contenders were the mellow love song "Heaven" by Los Lonely Boys, the jumpy party song "Let's Get It Started" by the Black Eyed Peas and Usher's massive hit "Yeah!"

Loretta Lynn had five nominations in the country field including best country album for "Van Lear Rose" (which was produced by the White Stripes' Jack White) and two bids for best country song for "Miss Being Mrs." and "Portland Oregon."

Her album competition includes McGraw for "Live Like You Were Dying," Tift Merritt for "Tambourine," Keith Urban's "Be Here" and Wilson for "Here for the Party."

Half of West's 10 nominations were in the rap field, including best rap album. He competes against himself in the best rap-sung collaboration with the songs "Slow Jamz," performed along with Twista and actor-singer Jamie Foxx, and "All Falls Down," which he performed with Syleena Johnson.

In the rock category, Green Day's "American Idiot" was named in the best rock album competition along with Hoobastank's "The Reason," The Killers' "Hot Fuss," Velvet Revolver's "Contraband" and "The Deliveryman" by Elvis Costello & The Imposters.

Beach Boys frontman Brian Wilson's long-gestating album "Smile," which was recently released after years spent on the shelf following his emotional and mental problems, collected a bid for best pop vocal album. It competes with "Afterglow" by Sarah McLachlan, "Feels Like Home" by Jones, "Mind, Body & Soul" by Stone, and "Genius Loves Company" by Charles.

Jones and Stone compete against each other again for female pop vocal performance, with Stone's "You Had Me" and Jones' "Sunrise" up against "Oceania" by Bjork, No Doubt singer Gwen Stefani's solo single "What You Waiting For?" and Sheryl Crow's cover of the Cat Stevens song "The First Cut is the Deepest."

In the male pop vocal competition, Costello's cover of the Cole Porter song "Let's Misbehave" from the movie "De-Lovely" was picked along with the inspirational song "You Raise Me Up" by Josh Groban, John Mayer's "Daughters," Prince's "Cinnamon Girl" and Seal's "Love's Divine."

Posthumous was the operative word in the best pop collaboration with vocals category. Charles competes against himself with the duets "Sorry Seems To Be The Hardest Word" with Elton John and "Here We Go Again" with Jones. Also nominated was a cover of Bob Marley's "Redemption Song" by Johnny Cash and The Clash's Joe Strummer, both deceased. The other two bids went to veterans: Stevie Wonder and Take 6 for "Moon River," and Paul McCartney and Eric Clapton for "Something" from the album "Concert for George," a tribute to the late George Harrison.

The Grammys will be given out Feb. 13 in Los Angeles.