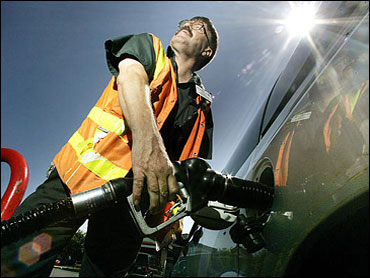 In a letter, the governors urged an investigation into "excessive profits being made by oil companies who are taking advantage of this national crisis."

The letter was signed by the governors of Oregon, Wisconsin, Michigan, Illinois, New Mexico, Iowa, Montana and Washington. It also urged Congress to refund any excessive profits to consumers.

The letter cited a study by University of Wisconsin economist Don Nichols that found the hurricane was not entirely to blame for high gas prices.

Historically, Nichols said, the markup between the price of a gallon of crude and a gallon of gasoline is about 85 to 90 cents a gallon, including refining, distribution and taxes.

The study estimated that for pump prices to reach $3 a gallon, the price of crude oil would have to be about $95 a barrel, but crude prices have been holding around $65 a barrel, and Katrina has not caused a surge in crude oil prices.

"The disconnect between gasoline and crude oil prices is quite remarkable," Nichols said.

Regardless, concerns that Hurricane Rita could smash into key oil facilities in Texas lifted crude-oil prices nearly $1 a barrel Wednesday as workers fled oil rigs in the Gulf of Mexico less than a month after Hurricane Katrina tore through the same region.

As Rita gained steam, turning into a Category 4 hurricane early Wednesday, the Gulf Coast began bracing for swells and high surf, which could be seen as early as Thursday, The Early Show's Dave Price reports.

According to news reports, at least three oil companies are already evacuating workers from their Gulf Coast oil rigs.

An offer by the Organization of Petroleum Exporting Countries to make available an extra 2 million barrels of oil a day did not seem to quell the market as the focus remained on the storm.

Prices could also rise further Wednesday after the U.S. Department of Energy releases its weekly petroleum inventories snapshot, which could show declining crude and heating oil stocks because of Hurricane Katrina.

Ed Murphy of the Washington-based American Petroleum Institute said refining capacity was tight before Katrina and the storm reduced it further by knocking out some refineries.

"That put upward pressure on petroleum prices," he said. "It's a no-brainer."