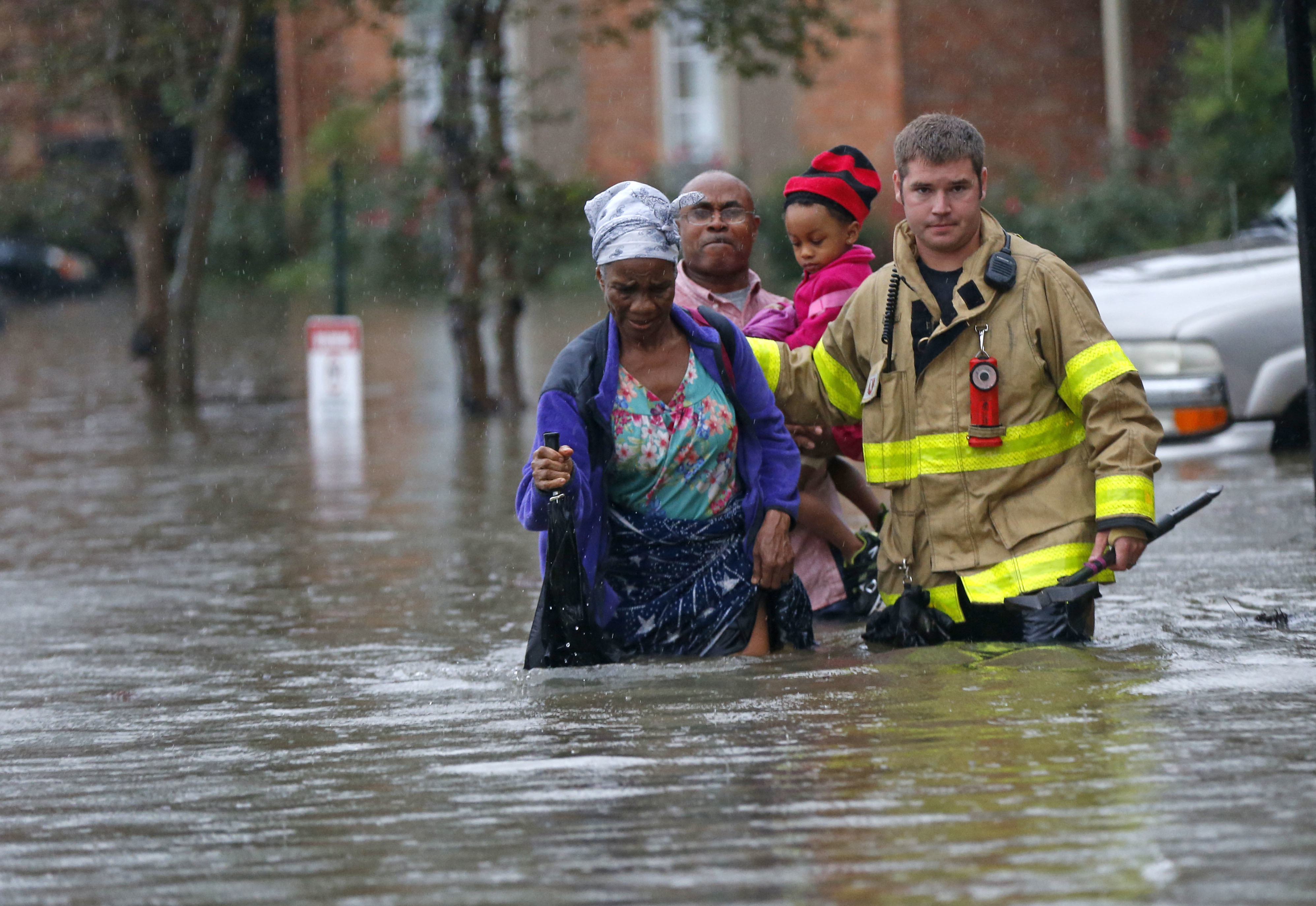 NEW ORLEANS -- Heavy downpours pounded parts of the central U.S. Gulf Coast on Friday, forcing the rescue of dozens of people stranded in homes by waist-high water and leaving at least two people dead in the floodwaters.

Louisiana Gov. John Bel Edwards declared a state of emergency as rescue workers in the southeastern part of the state braced for more precipitation through the weekend.

And the flooding hit close to home for the governor.

CBS affiliate WAFB reported that basement of the Louisiana Governor's Mansion in Baton Rouge has flooded.

The governor's family was relocated to another place to live until the situation is resolved, officials said.

Edwards was scheduled to return to Louisiana later Friday to deal with the situation. He had been in Colorado for a meeting of the Democratic Governors Association.

A spokeswoman for the East Baton Rouge Parish Sheriff's Office said one man died Friday after slipping into a flooded ditch near the city of Zachary. Casey Rayborn Hicks identified the victim as 68-year-old William Mayfield. His body was found around noon Friday.

Mike Steele, a spokesman for the Louisiana Governor's Office of Homeland Security and Emergency Preparedness, said requests were coming in for high-water vehicles, boats and sandbags. Tangipahoa Parish in the state alone requested tens of thousands of sandbags.

Authorities said Friday night that they also pulled a body from a submerged pickup on Louisiana Highway 10 in St. Helena Parish and they're searching the area for a possible second vehicle.

He says the body was turned over to the parish coroner's office. His name has not been released, but Browning says he's believed to be from the area.

Meanwhile, crews are continuing to search for possibly another washed away vehicle after residents reported a missing person.

A flood watch remains in effect through Sunday morning across most of south Louisiana. The weather service said in a statement that an additional 3 to 5 inches could fall over the area.

In south Alabama, a flood watch was in effect Friday as rain fell in the Mobile area.

He also said that flooding downstream in Ascension Parish is a threat, as those swollen rivers will be slow to drain into Lake Maurepas.

The Tickfaw River, just south of the Mississippi state line in Liverpool, Louisiana, was already at the highest level ever recorded at 9 a.m. Friday.

Rescuers were still plucking people from floodwaters in Amite and Wilkinson counties in southwest Mississippi.

Leroy Hansford, his wife and stepson were among those rescued earlier Friday near Gloster.

Hansford, 62, says waters from Beaver Creek, which is normally more than 400 feet away from his house, rose quickly overnight. He said another stepson who lives nearby alerted him.

"We woke up and the water kept on coming," Hansford said. "It came up to my waist." His wife told Hansford that it's the highest she's seen the creek in the 48 years she's lived there.

Hansford said he and his family members all have disabilities, and he's the only one who can swim. Hansford said emergency workers rescued all three in a large military-style truck and took them to the fire station in Gloster, where they were sheltering Friday.

More than 50 people have been flooded out of a neighborhood in Crosby, Mississippi, and will be housed at a shelter in Natchez. Wilkinson County Chancery Clerk Thomas Tolliver said an apartment complex and surrounding houses in the town were flooded after 10 inches of rain fell. Authorities said they expect to shelter displaced Crosby residents at least until Monday.

The forecaster Krautmann said flooding is "quickly becoming widespread" and officials are considering evacuation orders. Krautmann said one observer near Livingston reported 13.75 inches of rain from midnight to Friday morning.

Krautmann said the ground was heavily saturated by rainfall since Wednesday.

Heavy rain and street flooding prompted the rescue of residents from their homes in Tangipahoa Parish and the cancellation of classes in five school districts, authorities said.

Parish President Robby Miller said authorities rescued 72 people and seven pets stranded by high water. Shelters have been opened in the town of Amite and the city of Hammond to house evacuees.

"They will be allowed to return home once the water starts to recede," he said.

In Hammond, nearly two dozen streets were closed because of high water, and sandbags were made available to residents hoping to keep water out of homes and businesses.

"The last major flood we had was in March," said city administrator Lacy Landrum. "This one is on track to be a similar event."

In Mississippi, Harrison County Emergency Manager Rupert Lacy said steady rain continued on the Gulf Coast. He said a handful of houses were reported as flooded Thursday, but none so far Friday.

Keith Townson, manager of Shopper Value Foods in Amite, has lived in the area for 40 years.

"I've seen water in some places I have never seen before," Townson said, "and it's still coming down."