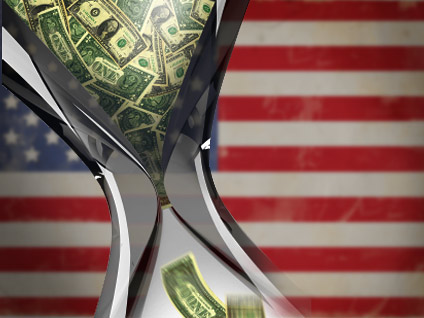 House Republicans on Thursday trimmed about $35 million from the House's operating budget, a move that Speaker John Boehner hailed as "a strong signal" of the new Congress' "commitment to making the tough choices necessary to end Washington's job-killing spending binge."

But while $35 million is a lot of money to the average American, it's worth thinking about just how "strong" a signal the House really sent. Consider: According to the Center on Budget and Policy Priorities, the government's projected spending for Fiscal Year 2010 is roughly $3.6 trillion.

That's right - the government spends, on average, nearly $7 million every minute. That means the cost-cutting measure yesterday only saved taxpayers enough to cover about five minutes worth of spending - less time than it takes to hold the average congressional vote.

This isn't to take anything away from efforts to address the government's massive debt problem - every little bit helps. But it does point to the daunting magnitude of the task facing lawmakers.

Republicans say they want to deal with the deficit by cutting spending, not raising taxes. But according to the Center on Budget and Policy Priorities, of the $3.6 trillion being spent in FY2010, only $2.2 trillion will be covered by tax revenues.

If you hold tax revenues at the same level, you'll thus need to come up with $1.4 trillion in spending cuts to stop borrowing and balance the budget - which means cutting nearly 39 percent of the budget. You could cut the entire defense budget as well as funding for education and transportation infrastructure and you still wouldn't be close.

As for the national debt - the number you get when you add up all those yearly deficits - it now stands at more than $14 trillion. That's enough to make yesterday's $35 million cut look positively quaint.