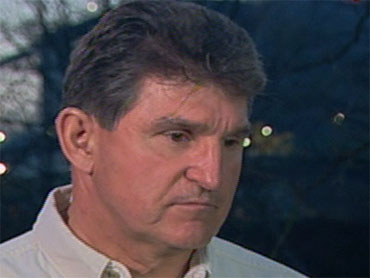 West Virginia Gov. Joe Manchin says the cause of the deadly explosion at the Massey Energy Co.'s Upper Big Branch mine in Montcoal is under investigation, but there would be "no excuse" if any safety violations are found to have contributed.

The explosion left 25 miners dead and four unaccounted for.

On "The Early Show" Tuesday, Manchin said he tried to stay optimistic when he first heard about the blast. "I'm thinking, 'You know, we've got rapid response, we had oxygen we had communications, we had shelters.' I said, 'Our chances are gonna be very good.' Everything was built-in. We've done that within the last four years, we changed all the laws in West Virginia. And the federal government has, too.

"Then we found out what a horrific explosion - with methane buildup -- and the explosion was just so horrific."

Asked by co-anchor Harry Smith whether he feels the mine was safe enough to be operating Monday, Mnchin replied, "I didn't know enough about that, because I rely on the federal and the state doing the job and making sure that compliance is met. If not, and I tell miners this every day, 'You have the ability to pull the plug and shut her down. If you're in unsafe conditions, shut it down. There will be no retaliation.'

"These are tough people. They're such good hard working committed, loyal. You're not gonna to find a better worker or better person than a West Virginian. And I don't know, I can't tell you. I want to find out, and I want to make sure that if, there's anything we can do to correct it, we'll do it, because we've done it before."

Smith pointed out that, "Massey has a spotty history with this, and especially has been fined for violations for improper ventilation of methane gas."

"I''ve heard that," Manchin responded. "And we just have to find out. There's no excuse."