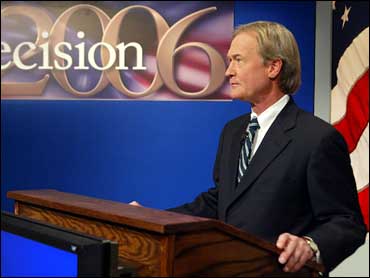 Al Gore finally found an audience he can connect with.

"I am a member of the NAACP! It's good to be home!" announced a relatively loose and palpably energized Gore, who scored a slam dunk with his speech to the national meeting of the National Association for the Advancement of Colored People in Baltimore.

Gore began by acknowledging the old guard civil-rights leaders on the dais and congratulating the freshly minted first female bishop of the A.M.E. church, a mostly black congregation. Then he got down to the day's business: drawing contrasts between his record and that of George W. Bush, who spoke to the group two days before.

A revved-up Gore then entered the convention hall, working his way through the crowd, pumping hands and darting back and forth to embrace people he apparently recognized, while an inspirational song played.

"I am running for president because I want to fight for you!" Gore told the crowd. "We're heading in the right direction… and we need to keep going!"

Gore reminded the audience that black unemployment is at an all-time low and urged them to vote for the "continuation of the economic plan that has been good for our people."

He compared Bush's "massive tax cuts for the wealthy" to his own $500 billion tax cut plan "targeted for the people who need" tax breaks, and reminded the crowd that he opposes Bush's plan to put two percent of Social Security benefits into private investments.

Four times Gore said, "Talk is cheap…" or "Talk doesn't cost much…" by way of beginning a comparison between Bush and himself on issues including affirmative action, the flying of the Confederate flag, judicial appointments and hate-crimes legislation.

In contrast to the curious, but just polite, reception Bush received from the same group earlier in the week, there was a celebratory, even triumphal, atmosphersurrounding Gore's speech. He was interrupted several times by applause and even cries of "Preach it!" when Gore quoted scripture to make the case that he, not Bush, would deliver the goods for minorities.

Even though Gore wasn't telling the audience anything they didn't already know about the differences between him and his opponent, the crowd ate it up, standing through most of the last one-third of the speech.

Gore invoked Martin Luther King Jr.'s mountaintop: "Let's make the march that will take us to the mountaintop of justice! And prosperity! And progress! And freedom for all the people of the United States of America!"

Gore, who was definitely in the zone, even found his Tennessee twang while linking Bush to the National Rifle Association.

So far, all the successful issue "steals" in the campaign have been made by Bush, who took the lead on Social Security with a plan that's proved popular. He also made education, a topic traditionally identified with the Democrats, his signature issue.

But in Baltimore, Gore stole back. He seized on what some would say is Bush's only environmental issue - contaminated city lots called "brownfields." The vice president, who has begun to identify Bush with the "do-nothing-for-the-people" Republican Congress, challenged Bush to do something about brownfields legislation that is tied up in Congress.

"There are powerful and wealthy special interests that have entered into a secret agreement" with Republicans in Congress to block the legislation, Gore said.

It was clearly the wooden vice president's most energetic performance since he cleaned Bill Bradley's clock in a couple of primary debates earlier this year. Can he keep it up? Stay tuned.