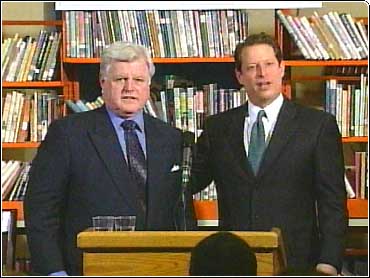 Al Gore got the endorsement of Capitol Hill's best-known liberal in January 2000, reports CBS News Correspondent Peter Maer. Sen. Edward M. Kennedy used appearances in home state Massachusetts and crucial New Hampshire to endorse the vice president, saying his former Senate colleague had "the ability, the experience and the wisdom" to lead the nation in the new century.

Gore had been "the voice for working families in this country" as a senator, Kennedy said. The Massachusetts Democrat noted that he had served in the Senate with both Gore and his father, Al Gore Sr., and he said: "The Gores of Tennessee represent the best in public service of our nation and the best in commitment to the democratic ideals of our party."

Kennedy and Gore appeared first at Grover Cleveland Middle School in the Boston's Dorchester section to talk about education policy before heading north to Portsmouth, N.H., to discuss health care with senior citizens.

The two issues are paramount to Kennedy, a liberal hero to many Democrats, and have been mainstays of Gore's campaign for the party's presidential nomination. Kennedy said Gore was "an effective leader" on these issues and "for the many other great causes we share."

"No one has fought harder or been a stronger voice for our Democratic priorities than Al Gore," said Kennedy.

With the New Hampshire primary less than a month away, the Gore campaign hopes the long-sought Kennedy endorsement will be a boost for the vice president in his close race with former New Jersey Sen. Bill Bradley. Gore aides also hope the Kennedy endorsement will reinforce the vice president's stands on health care and education. They also predict Kennedy's backing will help Gore win the support of many people who work in Massachusetts but live in New Hampshire.

Gore, speaking with reporters after addressing students at the Somersworth, N.H., High School on Tuesday, clearly was pleased by the development.

"I don't think anybody in the modern history of America has really accomplished more in the United States Senate over the course of a career than Ted Kennedy," Gore said.

Kennedy normally does not endorse candidates before the party's nominating convention. The decision to act now came after reflection over the Christmas holiday and a phone call between Kennedy and Gore since New Year's, according to people in the Kennedy camp.

Gore supporters had pushed for the endorsement.

Kennedy, brother of President Kennedy, sought the presidency himself in 1980. He has served in the Senate not only with both Gore and rival Bradley but with the vice president's late father, Al Gore Sr., in the 1960s.

The Kennedy camp said the endorsement should not be viewed as a slap against Bradley, who has unveiled a health care plan that Gore has criticized.

Bradley suggested the development only bolstered his contention that Gore is a Washington insider.

"I thought al along he would have more of the establishment support," Bradley told reporters Tuesday in Bedford, N.H.

The Kennedy endorsement was sure to garner huge coverage in the Boston media - which spills into vote-rich southern New Hampshire.

It also may trigger other endorsements by the Massachusetts congressional delegation, which largely has held off endorsing in the primary. Democratic Rep. Ed Markey took his name off that wait-and-see list Tuesday by campaigning for Gore in Iowa. Gore's campaign said Markey's endorsement brought the number of House Democrats backing the vice president to 122.

However, CBS News Correspondent John Roberts reports the Kennedy endorsement may not mean that much.

It bolsters Gore's support among Democratic leaders and may help win over swaying votes across the country. But in New Hampshire, where retail politics rule, it's the measure of the man, not the party apparatus, that wins the day. And in that, Bill Bradley appears to have the edge.

"I've been here 29-30 times in the course of the year," Bradley said, "and I do feel people know me more now than they did a year ago this time."

However, doubts still linger, and undecided voters will be closely watching tonight's debate.