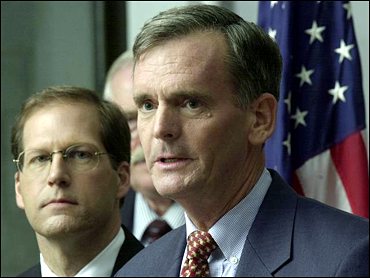 Republican Sen. Judd Gregg is the leading candidate to become commerce secretary and a decision could come as soon as Monday, CBS News confirmed Saturday.

Gregg's appointment to the post could give Obama and his Democratic Party a victory in the Senate, clearing the way for them to pass legislation without fear of a Republican filibuster. It also would provide the administration a strong ambassador to the business community in Gregg, who devised the $700 billion banking bailout package last year.

No firm decision had been made, said the administration official who spoke on condition of anonymity because the official wasn't authorized to discuss administration deliberations. The official also said there was no word on whom New Hampshire Gov. John Lynch, a Democrat, would appoint to replace Gregg.

But Gregg is working on a deal to keep the seat Republican. He interrupted an interview with CBS News correspondent Kimberly Dozier to take a cell phone call from Lynch, presumably to discuss the matter.

Lynch, a political moderate, could easily appoint a Republican, senior Democrats have told supporters in private conversation. They fret that independent-minded Lynch is likely to appoint a "placeholder" senator who would not permanently seek the office in 2010.

Gregg faces a tough re-election in 2010. His state has shifted toward Democrats in recent years and his role in the banking rescue plan would complicate a re-election bid in the "Live Free or Die" state the proudly rebukes government spending and has no state income taxes.

"It doesn't hit the nail on the head. The nail is the housing industry, the real estate issue in this country is what's driving this economic downturn, this recession," he told Dozier.

Republicans also object to programs that have been added that they say won't add jobs - like $75 million to help people stop smoking, Dozier reports.

New Hampshire Democrats have taken two House seats, a Senate seat and control of the state's Executive Council, House and Senate since 2004. Democrats slightly outnumber Republicans on voter rolls, but the vaunted independent voters - or "undeclareds," as they are known in the Granite State - lead both. Lynch won re-election last year with 70 percent of the vote.

Democrats already have eyed Gregg's seat as vulnerable for the right candidate. His appointment to the Cabinet could make it more difficult for the GOP to defend.

Democrats hold a 56-41 majority in the 100-member Senate, and two independents caucus with them. The Senate seat from Minnesota remains undecided, with Sen. Norm Coleman and challenger Al Franken in a close, court-based contest.

Gregg on Friday confirmed he was under consideration as Republicans urged him to think carefully about what it would mean to the GOP. Gregg's spokeswoman did not have immediate comment on Saturday.

A member of a New Hampshire political family and a policy wonk, Gregg rose through the Senate ranks to serve as chairman of the powerful Budget Committee and the Appropriations subcommittee that funds homeland security. Now in the minority, he is the ranking Republican member on the Budget Committee but still has large sway in the GOP's response to Obama's legislative agenda.

But as commerce secretary, Gregg would also have huge sway over the 2010 Census that lawmakers will use to redraw congressional districts to reflect states' populations. States such as New York and Ohio anticipate losing House seats; those Census numbers also will determine how many electoral votes states have in future president contests.

He would be Obama's second choice to run the Commerce Department. His first pick, New Mexico Gov. Bill Richardson, dropped out of consideration amid a grand jury investigation over how state contracts were issued to political donors.

Obama has spoken with his party's leadership on Capitol Hill about the move, which aides say could be a lost opportunity if the administration allows a Republican replacement to be named.

During the state's first-in-the-nation presidential primary, Lynch attended events for Republican John McCain. He also named GOP star Kelly Ayotte his attorney general as part of a centrist governing style that has given him a careful coalition.