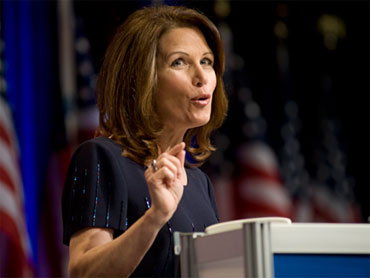 A tea party favorite is dropping her bid for a leadership position in the upcoming Republican-controlled House.

Rep. Michele Bachmann of Minnesota said in a statement Wednesday night that she is no longer running for the chairmanship of the Republican House Conference, the party's No. 4 position when it's in the majority.

Bachmann says she supports Rep. Jeb Hensarling of Texas. Hensarling has received the support of the current Republican whip, Rep. Eric Cantor of Virginia, as well as other top House Republicans.

Bachmann hasn't been able to match the endorsements Hensarling has received for the post. While she has raised millions of dollars, Bachmann has drawn negative publicity for erroneous and over-the-top statements.

It was just Monday when Bachman posted a letter on her House webpage, writing, "To our Conference I bring strong principled conservative values, a proven level of experience, effectiveness with our friends in the local and national media, and an energetic national constituency that reflects the results of Tuesday night," she wrote. "It is important that our Conference demonstrate to the people who sent us here that their concerns will be tirelessly advanced at the table of leadership."