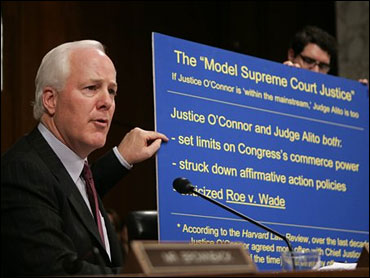 This story was written by CBS News' Director of Political Coverage Steve Chaggaris.

The new head of the National Republican Senatorial Committee, Sen. John Cornyn, R-Tex., said today the landscape will be different for 2010's Senate races as compared to last November's elections because "George Bush will not be in office."

"Now, what's different about 2010 than 2008? Well, George Bush is one of them," Cornyn told reporters at the NRSC headquarters in Washington. His point was that many of the attack ads run against Republican candidates in 2008 "involved references to their connection with George Bush ... taking advantage of his low poll numbers and trying to tie that candidate to the president."

Cornyn also pointed out that President-elect Barack Obama won't be on the ballot in 2010, which he thinks "presents an opportunity" for Republicans.

"There's no denying the phenomenon that the Obama campaign was in American politics," Cornyn said. "In a midterm election, a non-presidential election year, there won't be the kind of turnout you would ordinarily expect in a presidential year, nor will there be, I believe, the kind of enthusiasm you saw on the Democrat side."

The 2010 midterms are shaping up to be an uphill battle for Republicans; they'll be defending 19 seats while the Democrats have 17 seats up. And four Republicans have already announced they will not be running for re-election: Sens. George Voinovich, R-Ohio; Kit Bond, R-Mo., and Mel Martinez, R-Fla. - all from toss-up states. The fourth retiree, Sen. Sam Brownback is from Kansas, where popular term-limited Democratic Gov. Kathleen Sebelius may decide to run for Senate.

If that's not enough stress, the pressure will be on for the Republicans not to lose any seats. Currently holding only 41 seats, if the GOP drops below that number, they hand the Democrats a filibuster-proof majority, losing their last institutional power as the minority party.

In fact, Cornyn is using says they plan to use that as part of their strategy in next year's Senate races.

"I think there's a natural aversion of the American people to put all their eggs in one political basket. And we're going to be reminding them that that would happen if in fact the Democrats did get a filibuster-proof supermajority."

Looking past the adversity, however, Cornyn sees opportunities, many of them created by Barack Obama himself.

"First he's eliminated two key strong state office holders - [Agriculture Secretary nominee] Tom Vilsack and [Homeland Security Secretary nominee] Janet Napolitano - from running for Senate in 2010," Cornyn pointed out. He mentioned the Delaware seat that will be vacated by Vice President-elect Joe Biden tomorrow (to be filled through the 2010 special election by Biden aide Ted Kaufman) as another "opportunity."

A virtual unknown statewide in Colorado, Denver Public Schools superintendent Michael Bennet took Salazar's place and, Cornyn mocked, "the idea that Caroline Kennedy, having never run for office before, could be the next senator from New York" gives the Republicans "opportunities."

He also thinks the way the appointment of Roland Burris to fill Mr. Obama's vacant Senate seat was handled has given the Republicans a real shot in Illinois in 2010, something they never thought possible in the state where Republicans have had trouble getting elected statewide in recent years.

"As a result of the national embarrassment that has occurred here in Washington with regard to the Roland Burris affair, and the cloud that will invariably follow Mr. Burris as United States Senator, having been appointed by a soon to be indicted governor for corruption. That's an opportunity, I think, for us," said Cornyn.

It's unclear whether the 71-year-old Burris, who will be sworn in Thursday, will run in 2010, but clearly Cornyn is salivating at the prospect.

"I don't see how Mr. Burris can separate himself from the situation in which he was appointed."