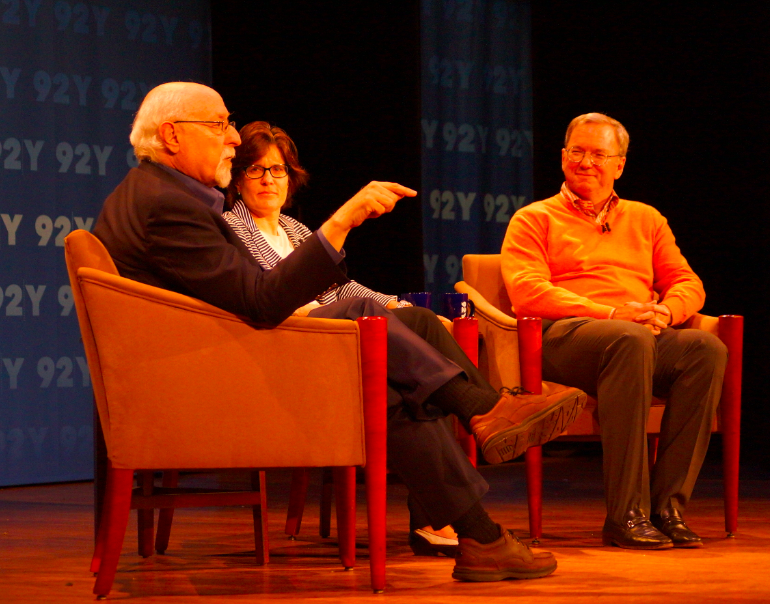 The Silicon Valley sometimes feels like a legal battleground filled with lawsuits filed by companies like Apple, Google and Samsung in a fierce cycle of competition.

During a chat with AllThingsD's Walt Mossberg and Kara Swisher Wednesday night in New York City, Google's executive chairman Eric Schmidt expressed his disdain for trying to innovate in a landmine of patents.

"These patent wars are death," AllThingsD reports Schmidt said, suggesting that they often overlap in the tech industry.

"Everyone can find prior art for everything," Schmidt said. "So the new trick is to get judges to block devices country by country. It's bad for innovation, it's bad for choices."

One of the biggest patent battles yet was won by Apple, when a California jury awarded the tech giant $1 billion in a patent infringement lawsuit against South Korean electronics company Samsung.

Apple sued Samsung for allegedly knocking off its popular iPhone and iPad. The computer giant sought $2.5 billion in damages. Samsung denied the charges and has countersued Apple for $422 million, ultimately losing the case.

If you've ever pinched the screen of an iPhone to zoom in for a better look at a photo or website, then you've just put to use one of Apple's patents.

Patents are meant protect intellectual property, but tech companies are increasingly arming themselves with patents in order to avoid debilitating lawsuits.

Recently, New York Times wrote about a company called Vlingo, a voice recognition technology company that was once tapped to supply technology for Siri before it was acquired by Apple.

Vlingo was on the cusp of sealing partnerships with Apple and Google when Nuance, a larger voice recognition firm, threatened to sue over patent infringement. Vlingo was pulled into a web of lawsuits that ultimately crippled the company.

"We were on the brink of changing the world before we got stuck in this legal muck," co-founder of Vlingo Michael Phillips told the Times.

Stories like Vlingo's are not lost on Schmidt, although Google was recently ranked by Forbes as the twelfth most valuable company in the world.

"The victims here are not Google and Apple," Schmidt told AllThingsD. "It's the little companies that can't acquire patents to protect themselves."

The Times article described the late Steve Jobs' obsession with patenting every invention surrounding Apple's original iPhone, whether or not it would be used, as a preemptive strike against potential lawsuits.

"His attitude was that if someone at Apple can dream it up, then we should apply for a patent, because even if we never build it, it's a defensive tool," Nancy R. Heinen, Apple's general counsel until 2006, told the Times.

But there are some tech companies that are trying to ease the grip of patent battles.

In April, Twitter released a manifesto, of sorts, in a document called "The Innovator's Patent Agreement." The micro-blogging company made a pledge to curb patent lawsuits by only pursuing cases at the request of the patent-holder. And use patents for defensive purposes only.

"We will not use the patents from employees' inventions in offensive litigation without their permission. What's more, this control flows with the patents, so if we sold them to others, they could only use them as the inventor intended."

On why Twitter wanted to adopt this policy, the company said on its blog, "employees can be assured that their patents will be used only as a shield rather than as a weapon."