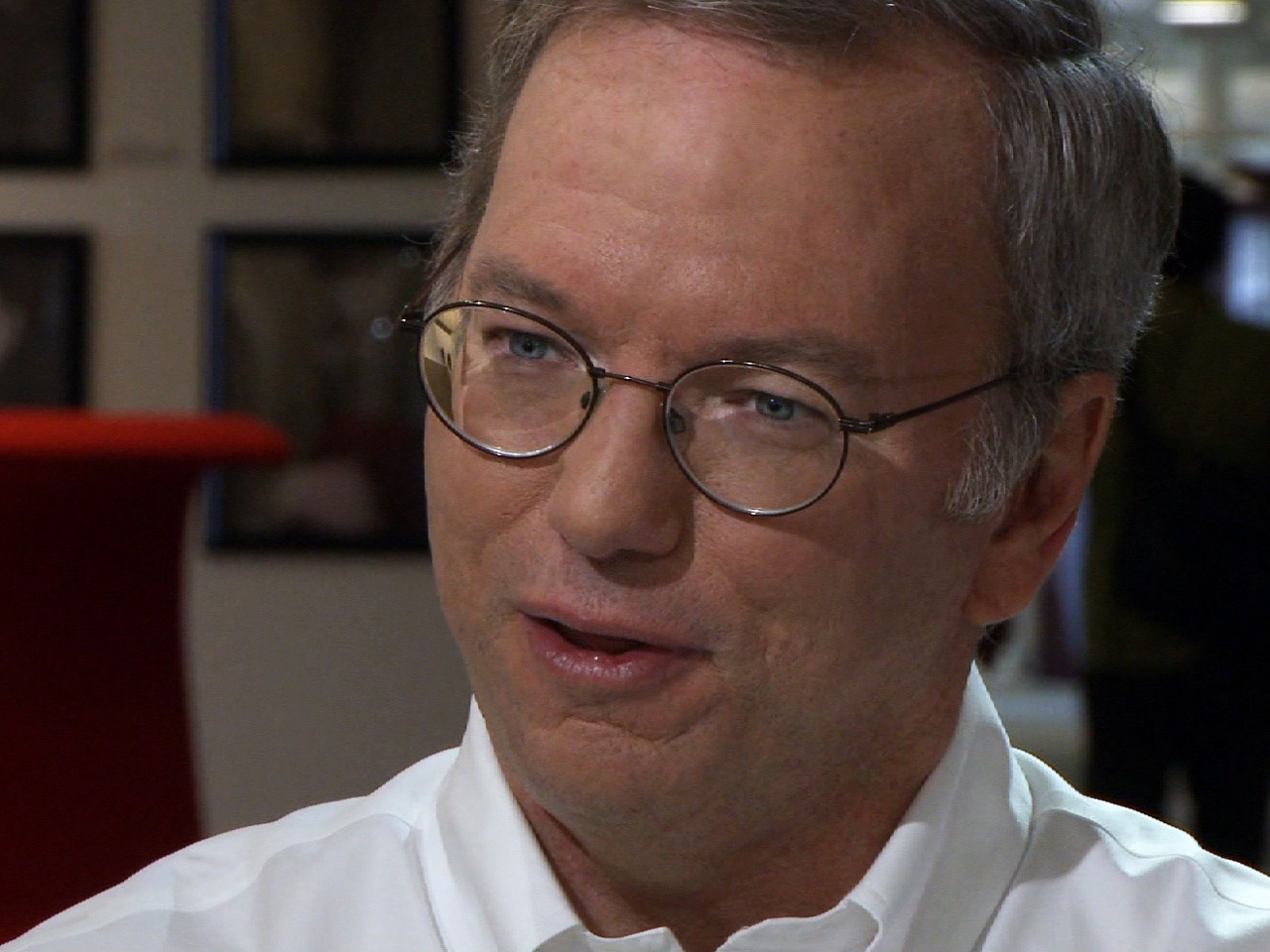 (CBS News) Connecting us with each other in ever-newer ways is the quest of all our high-tech wizards . . . and among those innovators you'll find The "Google Guy." He recently played host to our Rita Braver:

He's considered one of the most influential architects of the Internet, after a dozen years helping build Google (where's he's now Executive Chairman) into an international powerhouse.

But at 58, Eric Schmidt still remembers struggling with the original IBM personal computer some 30 years ago.

"It used little floppy disks, they were always breaking," he told Braver. "And to give you an idea, your computer, the one that you have on your phone, is about 100,000 times more powerful and has about a million times more disc storage than [the IBM PC]."

Those "dinosaurs" of computing history, now on view in Google's New York offices, are a reminder of how quickly technology can change.

Schmidt says in the future we'll do most of our computing on our mobile devices, with apps that offer a new range of services:

"They'll make suggestions to you," he explained. "They'll say, 'Eric, you're in your office. You should be working.! or 'It's lunchtime,' Or you're walking down the street and it'll say, 'Eric, you need new pants. The pants in the left store are cheaper than the ones on the right store.'"

Google is already working on a new generation of cars that can drive themselves.

Schmidt predicts many more advances in the book he has just co-written, "The New Digital Age." Example: new devices that bring three-dimensional sounds and images right into a room.

Will the Holodeck from "Star Trek" occur in our lifetimes?

"These digital devices will have a memory of where you were and what you did. And so, you'll go into a room and recreate that memory around you, because the visuals will be there, the video is there, and you'll have that tremendous feeling of where you were and what you do," he said. "There'll be devices that you can send to the concert to watch the concert for you while you're sitting at home taking care of the kids. And with a technology called haptic technology, you can feel the pounding, right as you're sitting in your living room."

But there is a downside to the new digital age as well. Schmidt predicts that we will all have to work harder to guard our personal information from identity theft, as crooks get savvier:

"When we first started building the Internet, we didn't even have passwords, because we trusted everybody," Schmidt said. "And we never figured that criminals would show up on the Internet -- and can we just get rid of them now?"

But even more troublesome is the scenario he paints for nations: a future where virtual armies become as important as real ones, to cope with a new era of permanent cyberwarfare which, he says, the Chinese are already waging.

"There's evidence that China is busy stealing the intellectual property of American firms to help compete with them," Schmidt said. "And there's also evidence that they're stealing into government, our newspapers and so forth, for various human rights violations."

"Is there anything that can be done about this?" asked Braver.

"It's always going to happen. And the best thing to do is to strengthen your defenses," Schmidt said. "I worry about the U.S. government because it's so large, and many of its computers are 'down rev' -- not up to date."

WEB EXTRA VIDEO: To hear why Eric Schmidt believes North Korea fears the Internet, click on the video player below.

But Schmidt predicts that increasingly, citizens in countries that block Internet access, like China or North Korea, where he recently visited, will find ways to get online.

"Humans are incredibly ingenious," he said. "But it will take special techniques. These people are hungry for information and empowerment."

And as the hunt for the Boston Marathon bombers showed, the world of digital technology will increasingly provide new methods for tracking terrorists.

On Google's rooftop deck, where you can see the new World Trade Center going up, Schmidt reflected on how much things have changed:

Schmidt believes that technology and the way we use it has the ability to make us safer in the future.

"So my message is that, if we're all connected and we're all sort of paying attention, we can see this," Schmidt said. "We can get ahead of it. I really do believe that."