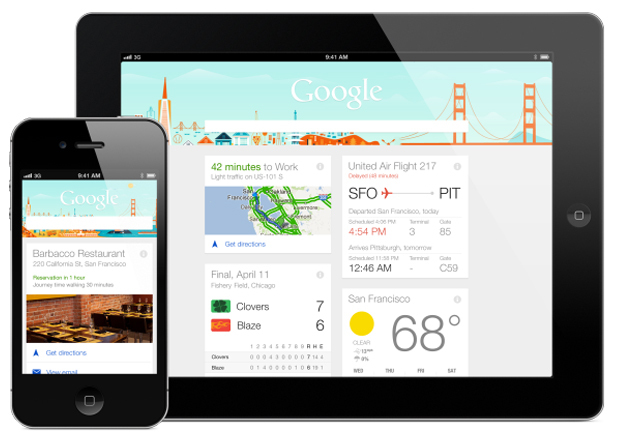 Siri is getting a little competition from Google. The search giant is rolling out its digital personal assistant, Google Now, for iPhones and iPads.

Like Apple's Siri, Google Now offers voice search and location services to display answers to questions, weather and traffic alerts. Unlike Siri, the app is part of Google Search and can't be launched by the touch of your phones home button on iOS devices. On Android devices, however, Google Now can be accessed right away, without launching an app.

Once Google Now is launched, a home screen will display cards, which are determined from data provided by other Google services.

Google Now's predictive search feature uses data from other Google products, like calendar and location to determine what information to display. Anything from traffic, weather, events or photos nearby can be displayed in the app.

While Siri displays data that is requested from the app, Google Now pre-loads cards that pull information from your phone, like current location for weather and traffic, in one stream of information.

The app also has the ability to detect follow-up questions that factor in context. If you ask, "Where can I get Mexican food around here?" and you don't like the results, you can follow up with, "What about Japanese?"

Google Now was unveiled at Google's I/O conference last year. The app is available at the App Store and Google Play.